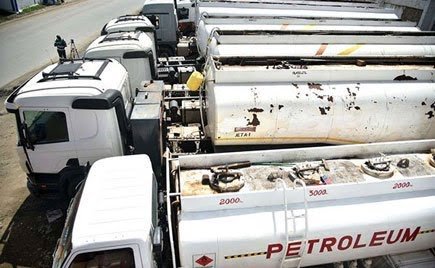 Uganda, Rwanda and the DRC are headed for fuel shortage after Kenyan tax authorities impounded hundreds of fuel trucks that channel the resourceful need to the neighbouring landlocked countries.

The Kenyan Revenue Authority says fuel dealers are pronounced defaulters having piles of debts dating back to 2015.

More than 200 fuel tankers loaded with fuel destined for Uganda, Burundi, Rwanda, South Sudan and the Democratic Republic of Congo are grounded at Eldoret and Kisumu fuel depots according to reports by The East African newspaper. The Kenyan Revenue Authority says they issued letters demanding taxes worth $7.2 million (Ksh 757.6 million) but none of the defaulters showed signs of making any payment.

The tax demands stems from KRA’s claims that the oil marketing and transporting firms have been loading products destined for the export markets but in the end would sell them on local markets, an accusation the transporters have disputed.

This impounding is likely to damage the land locked countries as domestic fuel prices are likely to surge and yet people are in a situation of travelling back to their upcountry homes. If Kenya is not considerate enough to see the necessity of fuel in this Corona crisis, then the land locked nations will heavily pay a price.

Umeme to bribe NRM MPs to consent to contract extension