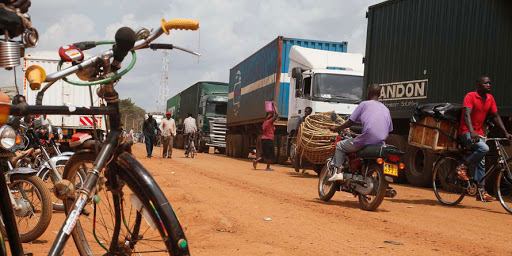 Dozens of trucks loaded with agricultural products like sugar cane, tomatoes, fish and vegetables are stuck at Busia customs border due to restrictions by Kenyan authorities not to allow people from Uganda to cross to its territory.

There is heightened security at the Uganda and Kenya border since Monday. The deployment follows a ban on travels both inland and outside the country with the exception of cargo trucks and planes announced by President, Yoweri Museveni as part of the preventive measures against the spread of the coronavirus.

Eunice Kamusi Nsubuga, a Sugar cane truck driver from Mayuge district, says that they are not allowed to enter Kenya even after being cleared by Ugandan authorities. He appeals to concerned authorities to intervene to allow them to take their sugarcane to the market.

Martin Angocha, another driver says that they have other goods they are supposed to pick up from Kenya but have been denied access.

Simon Sandos, a truck driver says that he has moved a long distance from Rwanda and he is supposed to deliver goods to Mombasa but is now stuck.

Elepot Eriya, the Busia District Police Commander, says they have received complaints and referred the matter to the Resident District Commissioner to engage his Kenyan counterparts to permit traders to transact their businesses.

Paul Kalikwan, the Busia Deputy Resident District Commissioner, says that they are laying strategies on how to engage Kenyan authorities so that traders are allowed to transact business without disruption.

Both Kenya and Uganda have confirmed COVID19 cases.