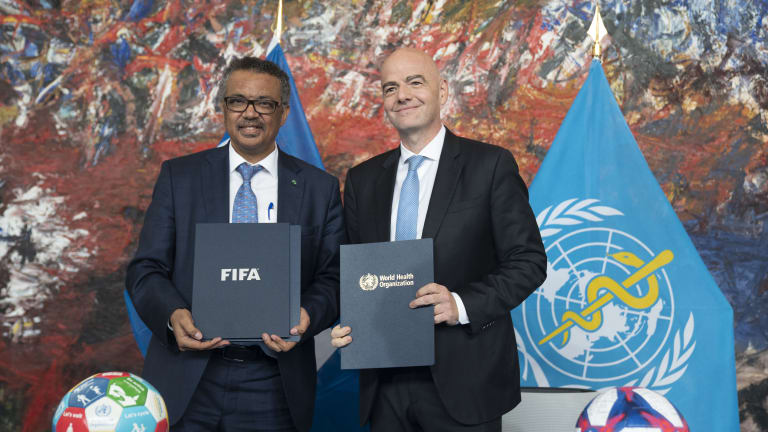 FIFA, the international governing body of football, and the World Health Organization (WHO) have teamed up to combat the coronavirus (COVID-19) by launching a new awareness campaign led by world-renowned footballers.

Through the campaign, dubbed “Pass the message to kick out coronavirus” football stars are promoting five key steps for people to follow to protect their health in line with WHO guidance, focused on handwashing, coughing etiquette, not touching your face, physical distance and staying home if feeling unwell.

“FIFA and its President Gianni Infantino have been actively involved in passing the message against this pandemic since the very beginning,” said WHO Director-General Dr Tedros Adhanom Ghebreyesus at the virtual launch of the campaign at WHO headquarters in Geneva, Switzerland.

FIFA President Gianni Infantino said that the campaign will enable some of the greatest players to have played the beautiful game of football to put their names to the campaign with a united desire to pass the message to kick out COVID-19.”

“We need teamwork to combat the coronavirus,” said Infantino. “FIFA has teamed up with the WHO because health comes first. I call upon the football community worldwide to join us in supporting this campaign to pass the message even further.”

It starts with your hands,” says Alisson Becker, the WHO Goodwill ambassador for health promotion, Liverpool FC and Brazil goalkeeper, and The Best FIFA Men’s Goalkeeper, 2019. “Please wash your hands frequently with soap and water or an alcohol-based solution.”

He said that such frequent washing with soap and water, or preferably with an alcohol-based hand solution kills viruses.

Carli Lloyd, the two-time FIFA Women’s World Cup winner from the United States advised the public to cover the nose and mouth with a bent elbow or tissue when sneezing or coughing, adding that “by following respiratory hygiene, you protect the people around you from contracting viruses, such as cold, flu and coronavirus.”

FC Barcelona and Argentina forward Lionel Messi equally used the campaign to advise the public against touching the face, particularly the eyes, nose or mouth to prevent the virus from entering the body.

Messi, the Best FIFA Men’s Player in 2019, and a multiple FIFA Ballon d’Or winners emphasized that Hands touch too many surfaces and can quickly pick up viruses and once contaminated, they can transfer the virus to the face, from where it can move inside the body.

Han Duan, who represented China PR 188 times in an international career that spanned 11 years encourages us to stay at least one-meter distance from others. Han says that by maintaining such social distancing, “you are helping to avoid breathing in any droplets from someone who sneezes or coughs in close proximity.

Samuel Eto’o, the former FC Barcelona and Cameroon striker reechoes an appeal to stay home. “If you feel unwell, stay home. If you have a fever, cough and difficulty breathing, seek medical attention and call in advance,” Eto’o said.

FIFA has also pledged USD 10 million to support the COVID-19 Solidarity Response Fund for WHO.