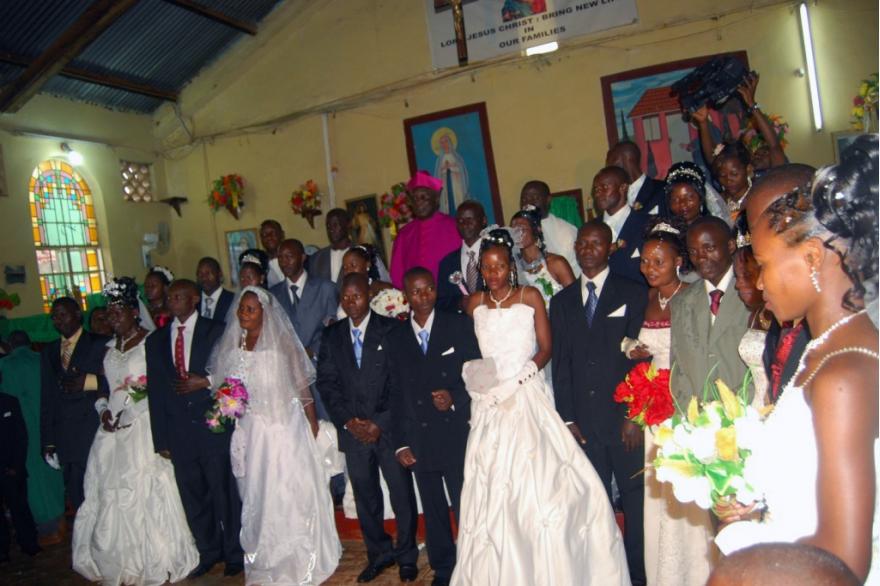 The ban on public gatherings announced by President, Yoweri Museveni as a preventive measure against the Coronavirus pandemic has taken a huge toll on several couples who had scheduled their weddings this season. On Wednesday last week, President, Museveni banned all kinds of public gatherings to allow for social distancing as one of the ways to stop the spread of the virus.

The 32 day’s ban ends on April 19th, 2020. In his televised address, Museveni advised “impatient intending couples” to consider marriage ceremonies with less than 10 people, which he called a scientific model.  URN visited some churches to find out how the ban has affected various couples.

Pastor Julius Rwotlonyo, the Associate Team Leader of Watoto Church, says 12 couples have been affected. He says one couple has postponed their wedding to a later date while 4 have accepted to have a “scientific wedding”.  “It is not an easy issue, so the others are yet to confirm with us if they would like to carry on with the weddings or not,” he said.

Rwotlonyo explains that the church has reached out to every couple that is affected and offered them the opportunity to “either go on with their weddings this season” or postpone. For those who will proceed with the wedding, Rwotlonyo says that the ceremony “is a little bit smaller.”

“But at the end of the day, it is a covenant commitment that they make the two of them with witnesses. So we are making sure that among the ten people who are present are significant people in their lives; their parents,” Rwotolonyo said.      Adding that, “And we do a meaningful simple ceremony so that it is memorable.”

Although the Anglican and Catholic churches do not officiate weddings during lent, some couples will be affected, since Easter Sunday and Easter Monday will fall on April 12th and 13th.

Rev. Samuel Muwonge, the Head of Missions Department at Saint Paul’s Cathedral Namirembe says there were no weddings scheduled to take place at the church two weeks after Easter.

The directive will, however, affect couples at different churches.

Rev. Canon Dr.  Rebecca Nyegenye, the Provost of All Saints Cathedral, Nakasero, says 9 couples whose weddings fall on April 17th and 18th have been affected. One couple has postponed while the rest are yet to confirm.

Haji Nsereko Mutumba, the Spokesperson of the Uganda Muslim Supreme Council, says even five people can be present at a wedding inside the mosque; therefore it is possible for couples to wed during this season.

Some of the affected couples have expressed frustration over the ban, mainly because of the financial implications. Joan Nakazibwe (not real names) had scheduled to introduce her partner on March 29th, 2020 and wed on April 17th at one of the churches in Kampala.

“I don’t know where he can keep most of the gifts and items like sugar, salt, sodas in the meantime because we are not even sure if the situation will be different after 32 days,” she said.   Adding that, “I think we would have opted for the scientific wedding if we had finished the traditional ceremony. But we cannot because 300 guests were expected to attend it from both families and the service providers have refused to refund our money.”   The couple that was expecting 200 guests at their wedding has also already spent Shillings 35 million, mainly on the venue, food, decorations, gowns, and suits.  They, however, have to find a suitable alternative date so that the paid-up service providers meet their side of the bargain.

26- year-old Naome Nahwera and her partner, Godwin Akampa have also been affected.

Nahwera’s traditional give-away ceremony also known as kuhingira was slated for April 11th but has been moved to May 9th. Their wedding is still on June 13th.

However, by postponing the traditional ceremony, the couple is on the pressure to also secure finances for the wedding.  Nahwera says she had spent close to Shillings 10 million on costs related to the traditional function such as buying her traditional outfits, paying for the food, entertainment, and decorations among others.

500 guests had been invited for the function in the village.  Her partner, Akampa has agreed that they should now focus on securing funds for the wedding, which is expected to have 300 guests at one of the venues in Kampala.

The Head of ICT and innovations at the Buganda Kingdom, Rogers Kaweesa would be visiting the aunt (Senga) of his partner this Saturday, which is traditionally known as Kukyala.   Kaweesa says he had shopped most of the items by mid last week and had spent Shillings 2.5 million. However, prices have been hiked for some of the remaining items, mainly foodstuffs including beef and tomatoes among others.

Kaweesa says that his partner, Winfred Naluzze and her aunt had also prepared to host him. They are yet to decide whether or not to proceed with the Kukyala. He, however, thinks that it will be postponed, from the look of things.