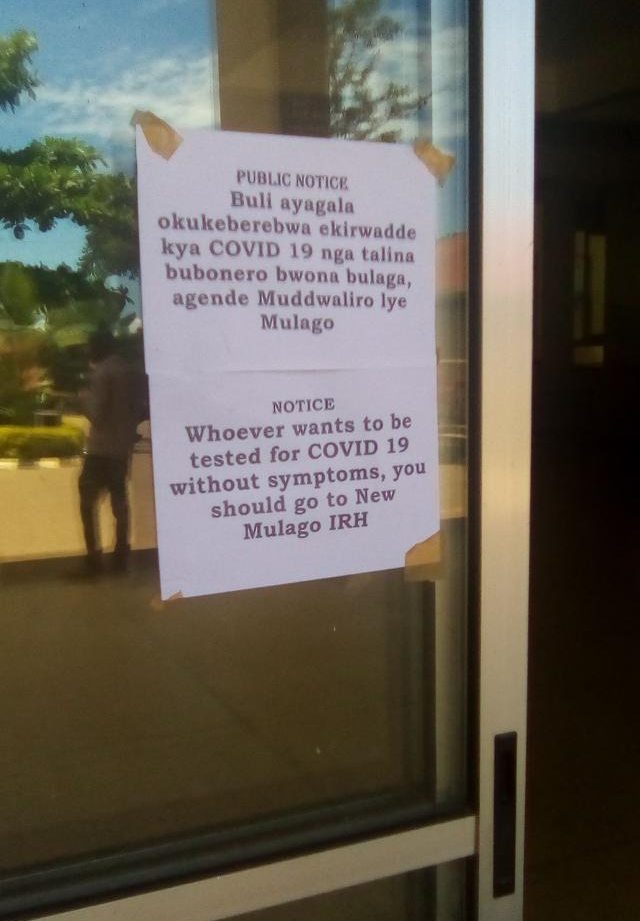 Entebbe Regional Referral Hospital is overwhelmed by the huge number of people seeking to test for the coronavirus disease-COVD-19. The Hospital Director, Dr. Moses Muwanga, says that several people have shown up seeking to test ever since the Health Ministry asked people who have traveled in recent weeks to test.

He says on Tuesday 300 people turned up and asked to be tested at the hospital, which has since been designated as a corona quarantine center.  The hospital first measures body temperatures to eliminate those with a fever. It draws samples from suspects and dispatches them to the Uganda Virus Research Institute for testing.

Muwanga says that the hospital referred most of the people to Mulago National Referral Hospital or told them to self-quarantine at home. He explained that this is mainly because the hospital is dealing majorly with confirmed cases. Uganda confirmed its first case last Saturday.

A total of 14 cases have since been confirmed. Dr. Muwanga says if other cases are admitted, they will be compelled to close other departments.

Many individuals and institutions have also made distress calls to the hospital to pick up suspects. Muwanga attributes this to the high level of awareness among members of the general public.

However, designating the hospital as one of the main isolation centers for corona patients has sparked fears and anxiety among some staff, especially those who are working in other departments such as maternity, pediatric among others.

Muwanga says that the hospital has not received additional funds but it got some supplies from the Health Ministry and Japanese government to run the isolation unit. These supplies include sanitizers, gloves, and masks among others.

The isolation unit currently has 20 trained health workers but Muwanga says that there is a need to increase the number to at least 60 so as to manage the ever-increasing number of suspects and confirmed cases.  The unit has a 26-bed capacity; however, one patient with the disease may require more space for better management.

One of the nurses at the unit advised the relatives to call or send recorded video messages to the suspects or patients. Those with foodstuffs were asked to first eat the edibles before a health worker would deliver them to the respective suspects. Access is restricted to staff and security officers who man the entry points. Some of the relatives also used the opportunity to test for COVID19.

Some of them told Uganda Radio Network that they are frustrated by long queues and delays in releasing the results. Most of them asked that their identities are concealed for purposes of confidentiality.  34 –year-old Joel Mugisha, (Not real name) said that he got tested after waiting for three hours.

He is however happy that he is negative and will now subject himself to self-quarantine for the next 14 days. Two other siblings namely Sarah Namusisi and Haruna Musisi (not real names) also tested negative. They were tested because they have been in close contact with one of the 21 suspects.

The suspect, who is Namusisi’s husband, was confined at the unit on Tuesday after he tested positive and then negative on the same day. The hospital has thereby told his relatives to wait a little longer for it to ascertain his condition. Namusisi says that her husband has been sneezing and coughing for the last two weeks, something that prompted them to visit the hospital for testing.

She says they first went to Kampala Capital City Authority-KCCA medical Centre but were advised to test from Mulago, Naguru and Entebbe Hospitals.

However the results had not yet been released by the time URN spoke to Namusisi, who says her husband could have contracted the disease from prolonged exposure to other suspects who may already be positive.

The hospital Director, Dr. Muwanga says that issuing negative result slips will give people false hope. Rather, they should self-quarantine for 14 days to ascertain that they are safe.

Entebbe Hospital has a capacity of 200 beds and serves a catchment population from Wakiso, Kalangala and Buvuma districts.