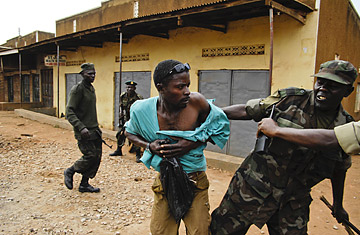 Reports coming in indicate that a looting expedition has enveloped the entire downtown Kampala as stranded people devise quicker means of survival.

Several videos are making round on social media depicting people crazily running after food carrying trucks and vehicles. This follows the presidential directive declaring a ban on public transport as a preventive means of containing the spread of the deadly Corona virus. After cases surging to 14, the president in a televised speech yesterday pronounced an immediate ban on public transport where he mentioned buses, taxis and Boda Bodas as potential carriers of the virus. The president’s directive however did not tackle the expectations of the layman as argued by several activist. Nana Mwafrika and Dr. Stella Nyanzi raised questions over how people will meet their life necessities like food, rent, water, airtime among other things at such a moment. Activists called for better means of protecting the vulnerable who make up Uganda’s informal sector. If Government fails to heed to such calls, the looting and theft cases are predictable at such a time.

One of the trending footage shows city dwellers running after a pineapple truck which they eventually rob as the driver speeds away. Nakabiibi Joan, a Kampala resident warned that such will escalate into yet a bigger problem. “If government doesn’t provide food for people in this pandemic just like other countries are doing, this and more are yet to come. You can’t stop people from working without plan B for catering for their necessities at least a loaf of bread per family…” she said. The Ugandan goverment is being blamed for not putting in place relief efforts for the vulnerable people who if not well handled, may become a problem within this bigger problem.