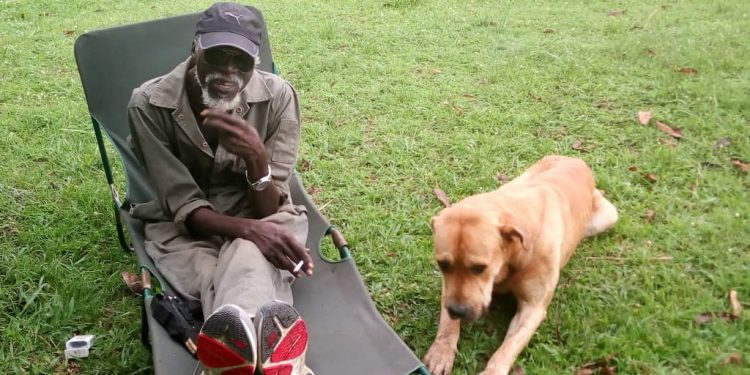 The retired Army officer was today spotted in Mityana town beating up traders and civilians for defying president Museveni’s preventive directives on COVID-19.

Backed by his military officers, Ggwanga took the trader by surprise and launched a flogging spree that indiscriminately tackled anything that crossed his site. Traders were seen abandoning their stock in fear of losing their lives as soldiers pointed their rifles at them threatening to open fire.

The vendors decried the actions of the retired UPDF soldier saying he is misled. “The trade minister said we can still operate our local stalls in strict compliance of the the health ministry’s guidelines,” says one of the traders reacting to Kasiyre’s actions. “What he has done is unacceptable and contrary to what we heard the president say,” he adds.

After unlawfully unleashing terror and wrecking havoc in the heart of the town, Kasirye Ggwanga was dramatically arrested by the police working on command of the Deputy Inspector General of Police, Brig. Sabiiti Mzee. The soldier was handcuffed and bundled onto a police waiting patrol and driven to the Mityana Central police station for interrogation and a statement.

It should be noted that earlier on, Maj. Gen. Kasirye appeared in a social media footage sharing his views on the virus. When he was asked how he is to help the public overcome this pandemic, Ggwanga said he was looking for vast land around Mityana where the government will construct a mass grave. “I’ve wandered through Mityana streets but people were in homes due to the rains. I’ve seen vast land in the countryside and this is where we will bury them,” Ggwanga said.