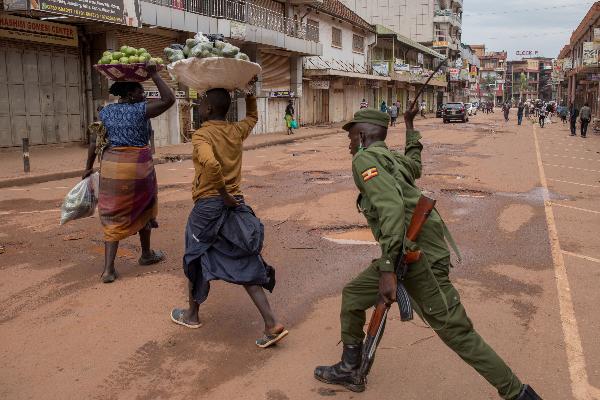 The Jinja Resident District Commissioner has instructed security operatives to continue beating up people if they disregard the presidential directive on COVID-19.

Sakwa has been actively involved in street operations and crackdowns on members of the public after the presidential orders on dispersing gatherings and banning public transport. “We see him in the LDU uniform holding a long whip to beat up people in town,” says a Boda Boda cyclist at Kaziminji street in Jinja Town. Sakwa says people are naturally used to torture if they are to absorb sense. “Understanding is not compulsory to all, you tell people to do this and they do the otherwise. Why not use force?,” Sakwa says. “Let’s beat them up and they get the message. We’ve used radios to caution them but still they proceed” he adds. Sakwa has also rubbished the trade Minister, Amelia Kyambadde’s soft approach on members of the public. “The minister is just romancing the people. Let’s sensitise them with whips, that’s when they will understand,” he warns.

Sakwa also accuses top government officials of defying the presidential directive on bars. Most are allegedly opening their bars to public access and yet such gatherings have been globally blacklisted as potential concentration points for the deadly Corona virus pandemic. In a Friday crackdown last week, Sakwa closed a bar belonging to the Jinja West MP, Moses Balyeku which was allegedly hosting over 50 people.

Uganda currently has 33 confirmed cases of the Corona virus disease as revealed by the Ministry of Health. Although the country is implementing the partial lockdown, security forces have been condemned for using excess force on citizens.