Bobi, Besigye speak out on Museveni ban on food supply 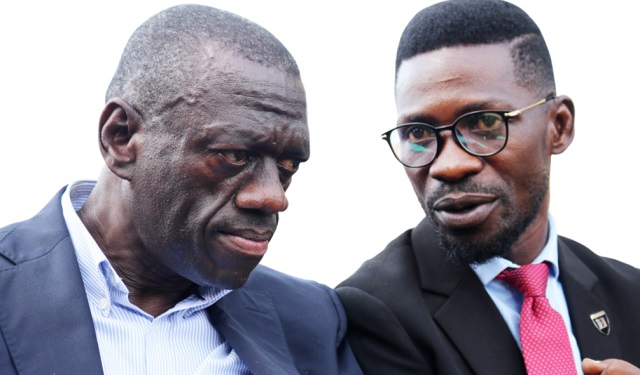 Members of Uganda’s opposition have scoffed at president Museveni over his decision to block them from delivering food relief to the downtrodden.

When Uganda plunged into a partial lockdown in wake of the COVID-19 pandemic, a torrent of businesses came to a halt. Consequently, millions of people who make up Uganda’s informal sector were left stranded with no hopes of making their ends meet. Worse still, they could not vacate the city as a ban on public transport was also put in place. The destitution and suffering of the people prompted religious leaders, activists and opposition politicians to donate food stuff and other life basics to temporarily back the stuck citizens. This seemed a relief to the trapped and was welcomed with public applause. However, in his Monday measures, Museveni who was expected to laud his rivals for that humanitarian gesture instead condemned it and ordered for the arrest of whoever soldiers on with that idea. Museveni pronounced his rivals as ‘killers and enemies of Ugandans’ as he claimed they would be charged with attempted murder for gathering people. Museveni further cautioned them from taking advantage of the pandemic and playing ‘cheap politics’.

However, Museveni’s ridiculous remarks did not appease those in the opposition. The Kyadondo East legislator, Hon. Robert Kyagulanyi Ssentamu and his People Power movement had mobilised some relief that was to be supplied to the vulnerable. This directive means all their plans have to be put at a halt. “Museveni in yet another ridiculous movez banned our relief activities and declared anyone who continues to give food relief would be charged with attempted murder,” Kyagulanyi says. “This is an absurdity like no other. Our view is that if Museveni was not doing this for political reasons, he would have instructed the Ministry of Health to put in place Standard Operating Procedures (SOPs) so that our efforts to help our people continue but in a manner that does not cause threat to their lives,” further adds Bobi Wine.

Four time presidential candidate and FDC leader, Dr. Kizza Besigye says Museveni is over using his position to play unnecessary politics. “The office of the Prime Minister, which heads the Government COVID-19 Task Force, is notorious for massive corruption scandals, the latest of which involved Donors’ money for refugees,” Besigye reveals as he disputes the idea of making contributions with Gov’t. “I think that Mr. Museveni is mis managing his political embarrassment. He thinks that people trying to fill the gaping holes in what would be state (public) deliverables, are undermining his power,” Besigye adds.