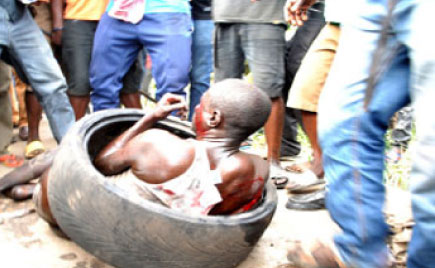 A mob in Kyengera town council has attacked the residence of Moses Kiyimba, a Dubai returnee and beat him to pulp as they claimed he escaped from quarantine.

Kiyimba, a 30 year old father of two was collected from his home where he was having a meal with his family before the mob swelled, charged and pounced on him. The mob accused him of having evaded quarantine as they claim he had only spent there seven days before returning back to the community. “This man did not spend there all the mandated fourteen days. He must have escaped from institutional quarantine,” said one man in the mob. The violence ensued under the stewardship of the area local council leader who declined to intervene. A physically defeated Kiyimba was only saved by police which arrived several hours after the scuffle. Kiyimba defended himself clearance papers from the health ministry which pronounced him negative of the Corona virus disease. “Aren’t these papers from Mulago? This is my clearance and these are for my kids. We are all negative,” Kiyimba gasped as police bundled him onto a waiting ambulance. Kiyimba sustained bruises and several clots from the beatings. Police castigated the public for using mob justice instead of inviting the relevant authorities. “In the beating process, you too can contract the virus. Let’s stop this stigmatisation of the infected patients. The virus is not an offence,” a policeman told the mob.

Uganda currently stands at 44 cases after all the samples tested on April, 1 tested negative. The health minister, Jane Ruth Aceng will once again address the public at 10:00 hours of April, 2 in a widely televised address.

Bukedde journalist kicked by Among guard flees to exile