LDU breaks into family’s home, flogs all and walks away with food 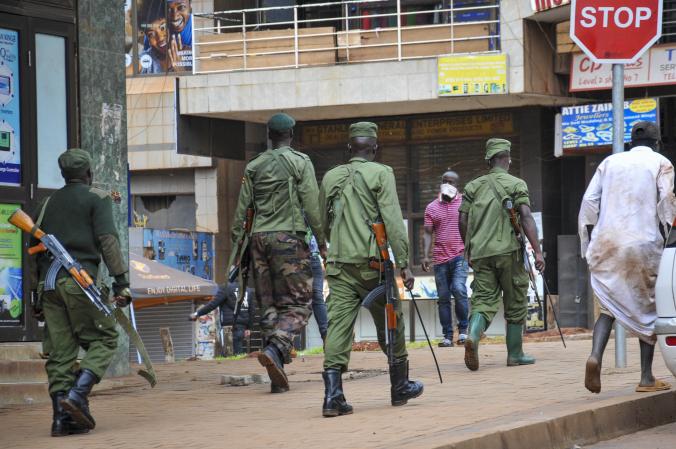 A family in Kasangati will live to remember the times of the Corona curfew. This follows a night raid done by the patrolling Local Defence Unit officers who spent the entire night implementing the presidential 19:00 hrs curfew directive.

During president Museveni’s fifth televised speech on the Corona preventive guidelines, he ruled that a daily curfew was to last for the next fortnight from March, 30. The operation has since turned out an opportunity to the vengeful LDU soldiers who are popular for unleashing terror and anger on civilians. Several reports implicate them to be messengers of agony. The day one of the crackdown will be lifetime memories for the street vendors, Hadijja Aloyo and Christine Awori who faced the wrath of these angered men.

In Kasangati, a family that preferred to speak anonymously says they were raided last night, April 1, at 20:00 hours by a team of heavily armed forces of the LDU. They say these men tried to break into the house as they made vows to punish whoever they would find in the homestead. “They tried preaking the door with the gun butt. I decided to open for them because they had vowed to torture all of us if we didn’t heed,” says a frightened family member. “I opened for them and they searched the bedroom and everywhere before they came to the living room,” he adds.

These shameless men in uniform gobbled down the meal that had been prepared for supper before they arranged all the family members for a coordinated flogging. “They ate our food and then asked all of us to lay down before they beat us with electric wire whips,” explains the family member as be displays the marks of the bruises. After beating everyone to their satisfaction, they confidently walked away to man the curfew in the neighbourhood.

The head of land operations, Lt. Henry Obbo yesterday cautioned members of the forces to act responsible or be personally charged for their misconduct. “In the military, we have no space for mistakes. We will charge anybody found torturing citizens,” Obbo old the media yesterday while being questioned about the escalating LDC misconduct. In the Tuesday plenary, the speaker of parliament, Rebecca Kadaga asked the UPDF representatives to parliament to reveal who would answer raised concerns on the members of the LDU.