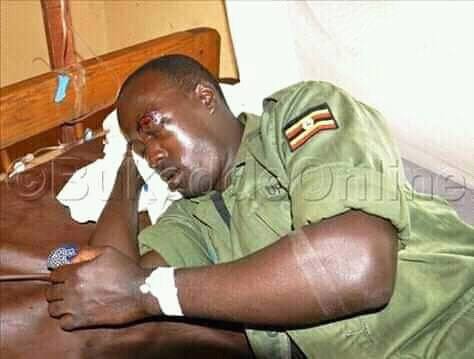 Willy Jjuuko, a Local Defence Unit soldier faced it rough yesterday in Kalungu when locals forced him to taste on his own dose.

Locals stress that Jjuuko had transited into a messenger of terror who would extract pleasure in the wailing of others. “He loved beating unnecessarily. He uses the curfew to push his terror agenda,” says Kivumbi, a local Boda Boda rider. Eye witnesses say Jjuuko who usually bore a thought that flogging people is his monopoly was left in shock when masses overpowered him and beat him to pulp. It is said he faced his wrath when he laboured to disperse a gathering of more than five people. Jjuko is currently nursing wounds at St. Monica Birongo health centre in a very critical state after sustaining a deep cut on his left eye.

The Kalungu Deputy RDC, Hajat Sarah Nanyanzi and the area LC III chairperson, David Balemeezi condemned the actions of the charged mob saying it was not fair to brutalise an officer on duty. The chairperson further links the absurdity to a local terror gang dubbed ‘Kasolo Kikoosi’ which he accuses of masterminding terror on citizens and the members of the forces. “We had fought this gang but now it has a backing of Kampala returnees who fled Corona,” the chairman intimates.

Speaking of the incident, police say they have made some arrests and suspects are to be charged with attempted murder and assaulting of an officer on duty. A statement from Jjuuko has been retrieved to guide the direction of the investigations. Another resident, Ronald Sserugo sustained fatal injuries from the same attack.