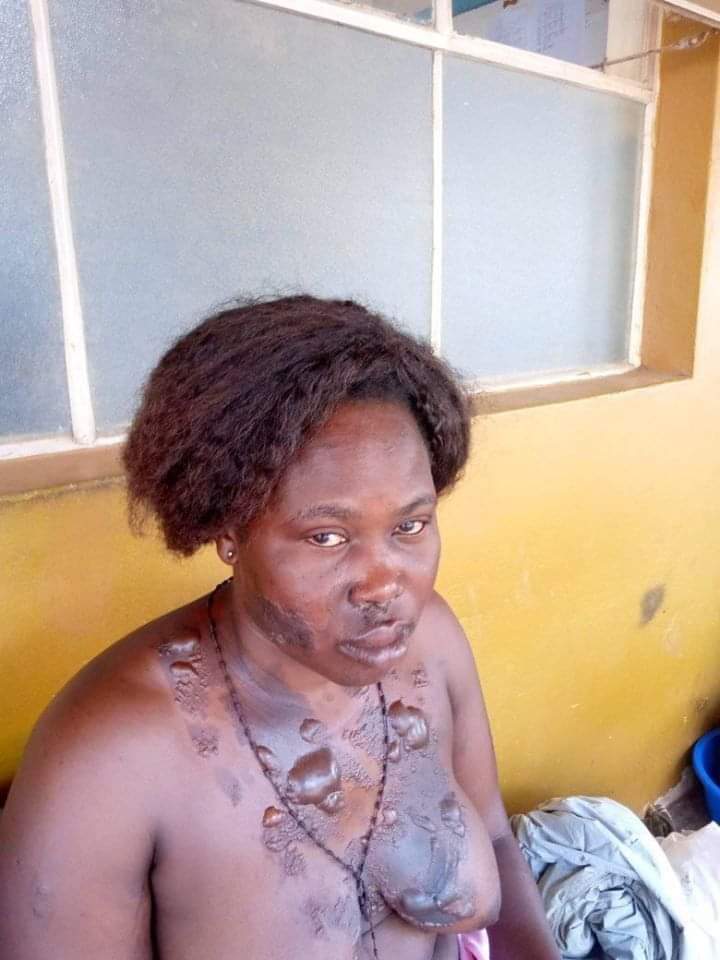 A woman, Alanyo Joyce, 30 is nursing blisters she sustained from a night raid on her residence by members of the Gulu district COVID-19 taskforce.

The single mother of one was preparing food supplies on her veranda close to Gulu hospital when the callous team members encroached on her premises and wrecked havoc contrary to the presidential remarks banning such in curfew hours. Her neighbours who spoke to our reporter on phone say the incident occurred on Wednesday evening at 19:00 hours in Bar-Dege division. They intimate that they saw taskforce members approaching Alanyo’s work place near Gulu hospital before one of them fumed and kicked a hot bowel containing cooking oil. The hot oil hit Alonyo’s chest and instituted serious burns on her chest.

Alonyo had spent nearly two days without eating a decent meal. “This woman has slept hungry for two days. A well wisher today brought her the chicken she was frying,” Felestos Ochaya, a resident of Bar-Dege says. “As she was preparing her meal, one of the taskforce members jumped off a vehicle and kicked her hot frying pan and it burnt her instantly,” Ochaya adds. After unleashing terror on the woman, the taskforce team claimed they were implementing presidential directives and maintained Alonyo was wrong to cook from outside her house.

By publication of this story, Joy had been admitted at Gulu referral hospital where a surgery on her burns and blisters is looming. The Gulu district local council leaders disowned the actions and said they are investigating the matter keenly. Neither the RDC, Lt. Santos Okot Lapolo nor the LCV boss, Ojara Martin Mapenduzi could be reached for a comment. In reference to Museveni’s Wednesday night address on the COVID-19 regulations, he directed all security forces to desist from beating up people. Our findings however show the contrary as the security men have still declined to heed.