OPM resorts to past thieving ways as more relief flows in 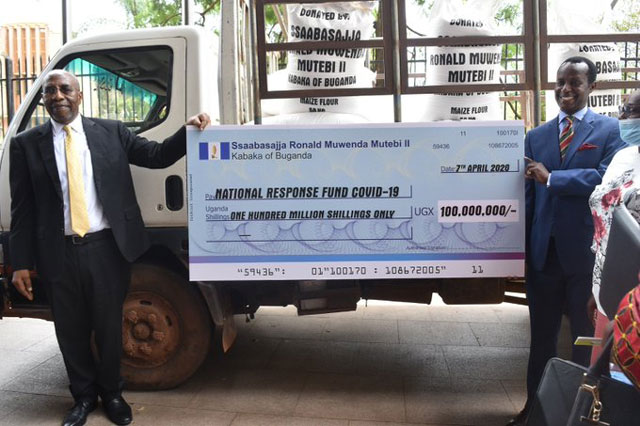 The office of the Prime Minister has resorted to it’s old ways of thieving and cheating Ugandans.

Earlier on Tuesday while appearing on a weekly Television political talk show, Tamale Mirundi cautioned members of the OPM and even blew a whistle to the Ugandans appealing to them not to ferry in their relief supplies to this taskforce on grounds of their dirty history and heaps of scandals. Mirundi questioned the credibility of the Office of the Prime Minister given their past scandals like the 2007 CHOGM scandal, Global Fund Trust and the refugee fund where trillions were lost to a handful of people attached to this very office. Thursday makes two days since Mirundi made that thieving prediction on TV and now it’s reflecting. A joint survey conducted by State House aide, Lt. Edith Nakalema has established that a team within the taskforce has been actively involved in money swindles. It has been discovered that members of the taskforce in liason with suppliers were hiking food prices to double. On the contrary, they were even kicking away other suppliers offering food at cheaper prices. Nakalema’s operation has led to the arrest of several senior officials. These were inflating prices and rejecting lower price offers from various suppliers of maize flour and on that note, PS Christine Kintu,Joel Wanjara, Fred Lutimba and Commissioner Martin Owori were all arrested. Lt. Edith confirmed their arrests on Thursday, April 9 and said all the four will be arraigned before court and charged with corruption related offences.

The arrest of these senior officials gives the public a sense of doubt in the scandalous Office of the Prime Minister which even in this crisis still traces for milking opportunities. It should be noted that hundreds of businessmen, politicians and tycoons are still donating huge sums of money to this very taskforce. Prominent tycoons like Hamis Kigunddu of Ham enterprises, Ruparelia group of companies, Century bottling company among others have already donated millions of money to boost the activities of the taskforce in their efforts against the COVID-19.