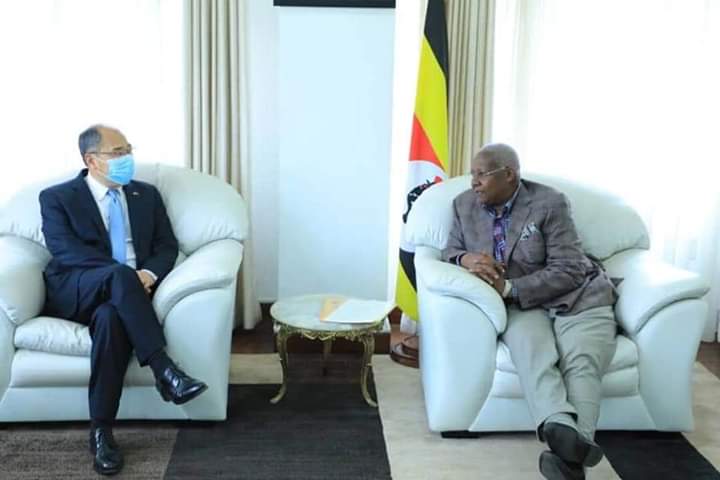 The foreign affairs minister, Sam Kahamba Kuteesa has today met the Chinese ambassador to Uganda, Zheng Zhuqiang to discuss the elevating xenophobic raids on Ugandans and Africans in China.

The meeting follows social media pressure mounted by stranded Africans who are sharing several disturbing images depicting blacks being evicted from their residences by the Chinese nationals.

In their discussion, H.E Zheng pledged to mitigate with Beijing and see if the authorities can watch over the crisis and provide immunity to people of the black race who are apparently targetted. The foreign affairs ministry has pressed the ambassador to attend to the crisis with urgency or else worse will arise out of the xenophobia. “The Minister conveyed the serious concern of the Government of Uganda on the harassment and mistreatment of its nationals,” part of the press release from the Foreign Affairs ministry reads.

Unlike other countries which are working on the evacuation of their nationals from xenophobic Chinese groups, Uganda had given the matter a deaf ear. To make matters worse, the COVID-19 crisis did not even find the Ugandan ambassador to China, Dr. Crispus Kiyonga in that territory, a factor that makes the embassy lack a sounding figure to face off with the officials in Beijing. Kiyonga is reportedly in the country and our sources are authoritatively aware that he even took part of today’s meeting with the Chinese ambassador.

After the fall of COVID-19 cases in the Chinese territory, the country has been hit with racial sentiments mainly targeting black people who they accuse of being the cause of the Corona virus. The Chinese inland social media platforms were awash with racial insults pelted at the black community. Several internal outlets like restaurants are reportedly pinning posters asking black people not to dare step in their premises. One of the outlets has a poster reading, “Now foreigners are forbidden to enter the community, ESPECIALLY black people.”