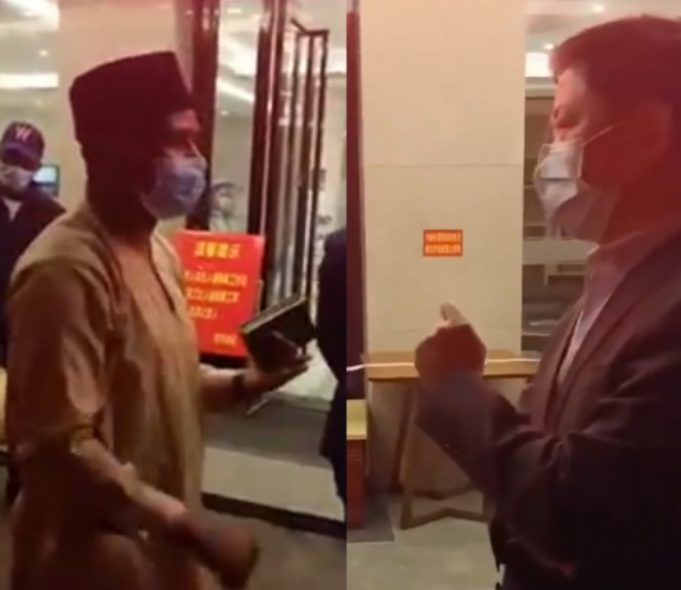 On Friday, 10 April, the consul General of Nigeria in Guangzhou, China, H.E Anozie Madaubuchi Cyril confronted official in the Chinese police who were brutalising Africans.

The Chinese are accused of targeting blacks as a preventive force to curb the spread of the Corona virus within China’s spheres. Mr. Cyril physically engaged Chinese authorities and tasked them to explain why they are treating Africans like ‘lesser human’. “No Chinese citizen has served the same treatment in Nigeria, why are you targeting Africans?,” asked the Nigerian envoy. “The Nigerians you’re harassing have not even flied out of China!,” he alarmed. The footage of this confrontation has since hit social media platforms of several countries around the world. Cyril’s heroic act has been warmly welcomed around the world. “He has exhibited great leadership. True leaders object injustice regardless of what,” tweeted a Ugandan national.

China has been discredited by other nations as being the masterminds of the attacks on Africans. The communist government initiated propaganda on Africans as being the carriers of the Corona virus. They even instructed land lords to evict African tenants from houses. Several other restrictions were put in place as restaurants and hotels were asked not to serve food to African natives. Africans living in China are caught up in the jaws of the looming racial prejudice. Majority are spending nights on the streets following eviction from their rentals. The most touching story is of a Ugandan mother of two who has fed her toddlers on water for two consecutive days due to restraining orders that hinder her from walking out of her home.

In Kenya, politicians have reacted to the racial abuse exhibited by Chinese authorities and have asked for the same to be done on their soil. Uganda, a country that holds a 58 year old friendship with China is still silent on the matter of evacuating her nationals back home.