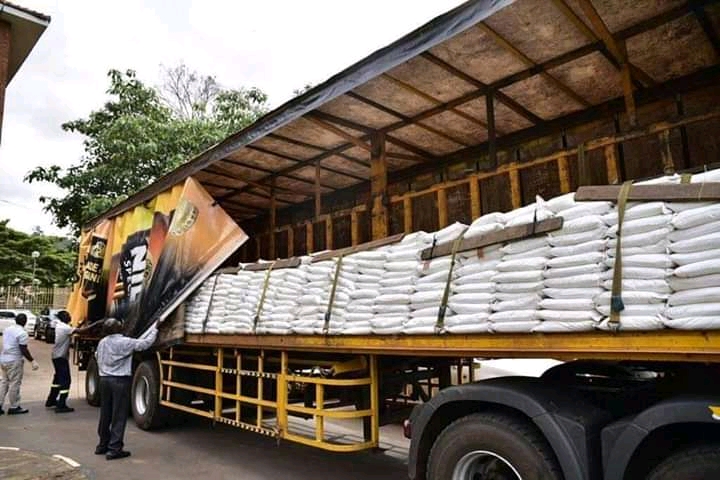 Residents of Jambula Zone in Kinawataka were over the weekend heavily immersed in verbal rants with the COVID-19 taskforce team for offering poor quality food.

A surge of locals armed with saucepans filled with posho were since Saturday seen disposing off the unwanted contaminated meal which they say would arise health complications to their lives. When contacted by the media, Kampala Minister, Betty Amongi refuted claims that the food was theirs. She instead linked it to the Nile Breweries Limited, a firm largely reputable for producing local beer. “The food is branded NBL to mean Nile Breweries Limited. Branding has helped us trace who the donors are,” Minister, Amongi was quoted by the press. “We however asked our UPDF troops to replace the bad food with that of the government. We regret the incident and we’ll press NBL to explain their dishonesty,” she added on Sunday.

As the anger geared up with Kinawataka locals calling for a boycott of the Nile Breweries products, the panicky company officials have engaged the Office of the Prime Minister to regret the incident. “We are extremely disturbed and regret social media reports that residents of Jambula zone in Kinawataka have rejected the food we donated on grounds that it doesn’t corroborate with minimum quality standards,” NBL boss said in a phone call to the OPM. “We didn’t intend to cause harm to anyone because we had our posho tested at the UNBS labs and it got certified as quality enough,” he added. As he laboured to attribute the incident to the UNBS, the Prime Minister told him that the matter was serious that he would imagine. “I am inviting you for a re-examination of the same food at the UNBS labs. After this, all the concerned will be apprehended and charged,” Rugunda warned.

The furious Kinawataka locals advised NBL to stick to what they know best and leave the relief matters to the specialised teams like Red Cross. “We are not animals to be fed on such poor quality food. Much as we are vulnerable, it does not mean we will eat whatever comes our way,” said the Kinawataka LCI. “Much as these companies are giving relief, they should hold in mind that humanity matters,” he advised.