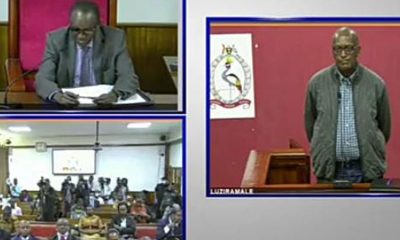 Former security minister Lt. Gen Henry Tumukunde has been denied bail due to the National wide lockdown in a bid to prevent the spread of COVID-19. The Judge ruled that much as Tumukunde was of advanced age, has a permanent residence at Kololo within the jurisdiction of the court, and is innocent until proved guilty,  the fact is that movement was restricted under the Presidential Directives, and that nothing is functioning normally, as this is a matter of survival, not convenience.

Judge Kwesiga said that Tumukunde’s bail application can only be reconsidered in the future after the prevailing conditions. The Judge also dismissed Tumukunde’s sureties who included his wife Stella Tumukunde, FDC’s Salaam Musumba, and his Brother Hannington Karuhanga, and ordered him to bring at least two military officers who are either at his rank or above his rank with a letter of introduction from their CDF if they are still serving officers.
He had only presented Rtd Gen. Mugisha Muntu.

Tumukunde was on 18th-March-2020 charged before the City Hall court with Treason and Unlawful possession of firearms and was remanded to Luzira prison.

However, Tumukunde and his Lawyers led by Anthony Wameli say they respect the court ruling but disagree with the Judge’s findings,  as well the continued refusal of him to access his Lawyers, Doctors and Family members yet business at Luzira prison is going on normally despite the COVID-19 Pandemic.