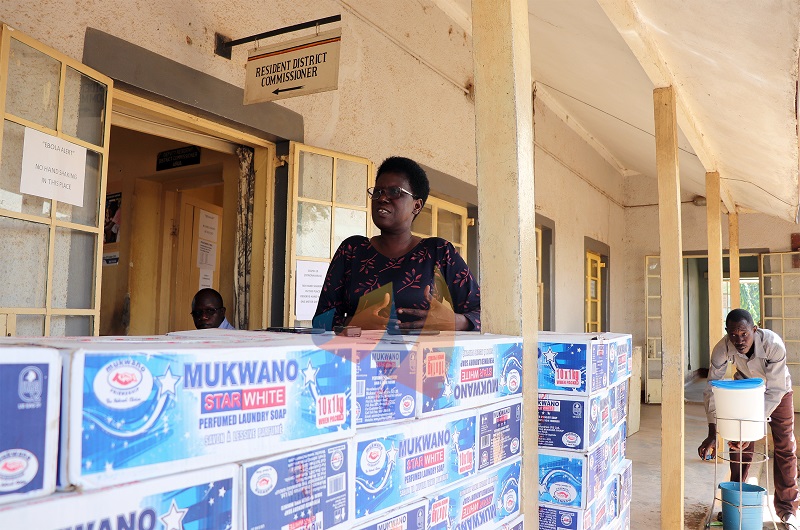 The matter of the golden hearted nurse who wheeled a patient to a distant Arua hospital seems to have long way to hit a dead end.

Shamed and blamed by the public for fuming at Doris Okundinia (good samaritan nurse), the Deputy RDC, Alice Akello Opio has swore an oath of ensuring that her mission to have her sacked gets fulfilled. A physically angered Akello revealed her anger at an open gathering as she received an assortment of shs 75m worth goods from local West Nile companies. “We summoned them to appear here at 10 am but they haven’t showed up. We are convening a meeting with the security team to find a way of getting them here any time,” she said.

The district authorities also back the RDC’s position of having the nurse and the journalist who shared the photos on social media apprehended and charged with acting unprofessionally. “We had emergencies at that time and the first one was a bleeding mother and the second one was a mother who’d failed go give birth… This is the issue I regret, but I don’t apologize for it. The journalist should be brought to book to determine if he acted in an ethical way,” says Drileba, the ambulance driver for Arua district.

Our source has since learnt that the nurse, Doris Okundinia is living under fear. Neighbours say the RDC stubbornly keeps on rading her home. “Every night we see the RDC, Akello and her eight UPDF team hunting for the nurse. We are afraid this situation my send our nurse in exile,” confessed Onyekait, a neighbour of the troubled nurse.

Health Minister, Jane Ruth Aceng took ti her Twitter to commend the nurse for devotedly doing her profession. She went ahead to describe her as one of the heroic medical front liners who deserve medals.

Samuel Tako, a local health worker in Arua says, “To blame the nurse for acting out of desperation is itself unprofessional. Instead of shifting the blame, the authorities should accept responsibility for their lack of action. It is possible that the ambulance was sent after realizing that the patient had already reached the hospital.”