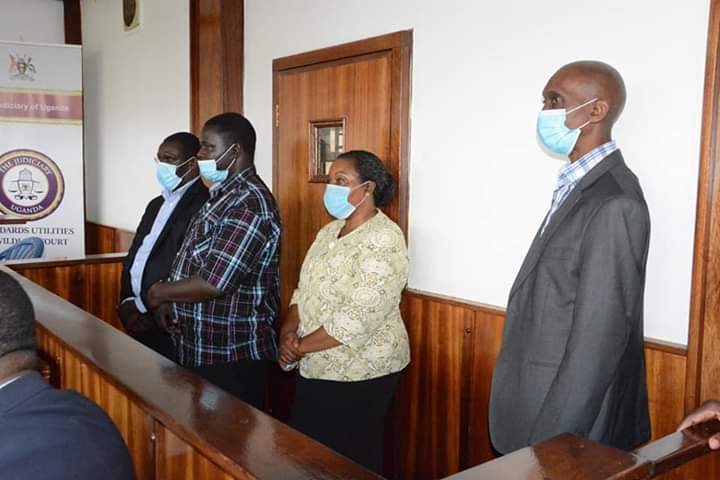 Buganda road court presided by magistrate Olga Karungi on Tuesday remanded the four officials attached to the office of the Prime Minister who were arrested last Thursday on a presidential order.

The four were charged with corruption and mismanagement of public funds contrary to the ‘attempted murder’ charge that the president had pressed. The charged four were represented by Counsel Fred Muwema (2016 Mbabazi lawyer) and Busiro East legislator, Medard Lubega Ssegona.

Mr. Martin Owor (Commissionee disaster preparedness), Mr. Joel Wanjala (accounting officer), Ms. Christine Guwatudde (OPM Permanent secretary) and Mr. Fred Lutimba (assistant commissioner, procurement) are alleged to have colluded to spike the prices of the food relief in a bid to loot from the entire project. Prosecution says the four between March, 31 and April 8, at the office of the Prime Minister conspired to commit a fraudulent practice that was dishonest to the Ugandan taxpayers. Their act is said to have cost government dire losses amounting to shs 4b.

The four however denied the charges and asked for bail which angered the presiding magistrate, Olga Karungi as she declined to heed to the application. She dismissed the proceedings to May, 4 citing that the insufficient time could not corroborate with the COVID-19 lockdown. She remanded the four to Kitalya government prison.

The lawyers of the accused complained about the magistrates’ bias on the clients. Fred Muwema in fact argues that Uganda is not in a state of emergency and hence the constitution remains supreme and functional. He condemned the bail denial on the alluded magistrate’s grounds.