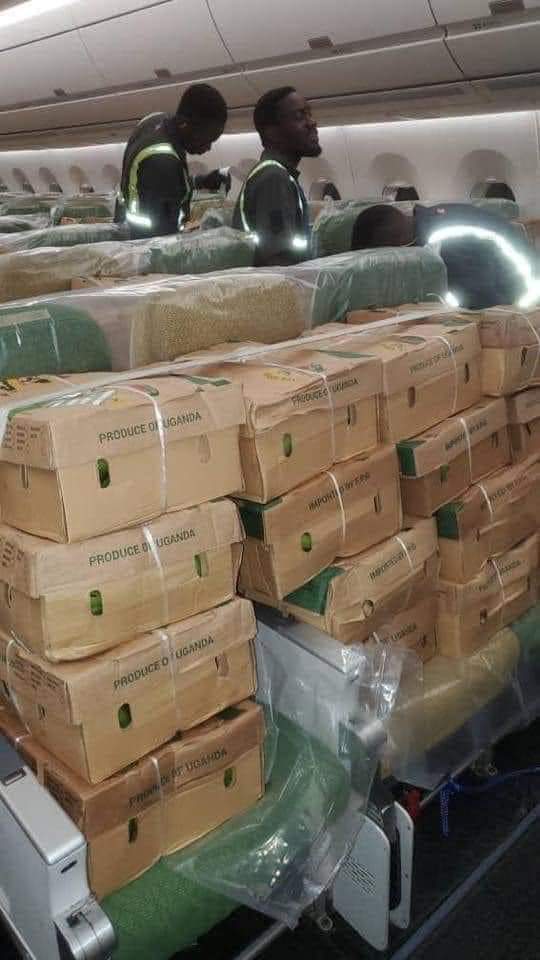 News reaching us indicates that top officials on the COVID-19 taskforce are exporting perishable food relief to Rwanda and South Africa.

While Ugandans are scrambling for the posho, a section of taskforce members are coordinating an illegal exportation of part of the donated perishable Matooke. Images of one of the food-cargo stocked Uganda Uganda Airlines bombardier leaked by a whistleblower dominated social media on Tuesday. Stacks of well packaged Matooke fixed in passenger seats are visibly seen with a team of inspectors making final observations. While other countries are busy feeding their starving populations, a deprived Uganda with a heartless Mafia clique is busy excavating what is left in the country. Reports of the coordinated illegal trade under the stewardship of the Prime Minister, Ruhakana Rugunda and Foreign Affairs minister, Sam Kuteesa went viral and sparked fury amongst the millions of starving Ugandans.

Reliable sources say Rugunda and his team are diverting perishable foods donated by Ugandan well wishers. “The lorry full of Matooke which was delivered by the religious leader, Bisakka is part of what is being exported,” says one of the low ranking people working on the taskforce. “We are then asked to decongest it and pack it in boxes. We do all this with some LDU officers,” the source adds.

While appearing on today’s political show, Tamale Mirundi seemed to be armed with related information when he appealed to the president to make mention of the donations and recipients. “As the president is reading out the donations, let him also mention where the donations will be going,” Mirundi said as he pressed for accountability. Other trusted sources say most of these taskforce members are intentionally hiding the food in their own stores in a bid to hoard it and sell it at higher prices. This is what prompted Museveni to make threats of importing food while delivering his Sunday address on COVID-19.