Hon.Zaake Laments the Ordeal of His Torture, Says he has Been Blinded and Can’t Walk. 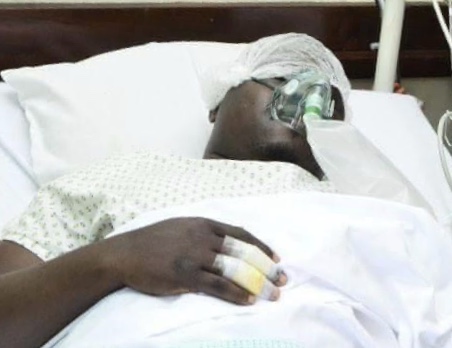 Mityana Municipality legislator Hon. Francis Zaake has appealed to the public to help him find rescue from the torture chambers.
According to a post posted on his official Facebook page by an admin, Zaake explains the ordeal of his murderous arrest and pleads with his supporters to help him get out of the hands of his tormentors.

According to the post, Zaake has been subjected to inhumane tortures that has left him unable to walk or see for the past three days. He says that several excruciating acts were manned on him in the process of his arrest and during his several transfers from Mityana to CMI headquarters in Mbuya.

Hon. Zaake was arrested on Sunday evening moments after he posted on his Facebook page, giving food relief to his constituents. This was after many of the vulnerable people in his constituency kept begging for food from him.

Zaake’s family could not access him as the police kept driving him from different torture houses.
According to the same Facebook post, Only Hon. Paul Mwiru the Jinja Municipality legislator who was able to access him yesterday 22nd April. It was after Paul Mwiru raised concerns that the legislator was taken to the Iran-Uganda hospital in Naguru.

Zaake also says that he is worried about the conditions of other people he found in torture chambers, including Voice of Africa journalist Katende who was arrested who was abducted after publishing a story of how Uganda is handling COVID19.

Below is his full Ordeal.

As you’re all aware, Hon. Zaake Francis was inhumanely arrested by Police and the Military from his residence in Mityana Municipality, Mityana District, on the evening of Sunday 19 April 2020. He remains detained to date. The cause for his arrest was that he had earlier that day sent a good samaritan to go door to door distributing food to his neighbours.

Since arrest, Hon. Zaake says he has been subjected to unspeakable torture while in detention at Mityana Central Police Station, at the Chieftaincy of Military Intelligence (CMI) in Nsambya Military Barracks, and at the Special Investigations Unit (SIU) in Kireka. This ordeal has left him in deep pain, blind and unable to walk for the past three days. He is suspected to have a broken spine and leg. His face is swollen. And most parts of his body especially his back, stomach and chest areas are covered by septic wounds oozing blood. He briefly describes what happened to him as follows:

As soon as they arrived at Mityana Police Station on Sunday night, Hon. Zaake was brutally kicked and punched by Police and Military officers under the watch, supervision and participation of Mityana District Police Commander (DPC) Alex Mwine and Wamala Region Police Commander (RPC) Latif Zaake (his namesake). He was severally punched in the face by RPC Latif, and kicked all over his head by DPC Alex Mwine both of whom directly participated in his arrest. Thereafter, they grabbed Hon. Zaake from the floor where he was groaning in pain, and dragged him towards a waiting double cabin police truck commonly known as “999 Patrol”.

On reaching the truck, the officers held together and tied Hon. Zaake’s hands and legs with ropes, and then pushed him under the open-air seats at the back of the 999 Patrol. They then fastened both ends of the ropes onto the seats, and suspended his body in that small space between the seats and the floor in such a way that his body was dangling below the seats but without touching the floor. They then drove him at high speed along potholed sections of an unknown road in such a way that Hon. Zaake’s body would swing and violently hit the sides of his metallic surroundings everytime the truck hit a pothole or hump. All the while, the soldiers seated above him kept taunting and poking Hon. Zaake with sharp objects.

The 999 Patrol drove for two hours until it eventually stopped in a compound that Hon. Zaake could not readily identify. The soldiers unfastened him from the truck, and dragged him into the basement of a big building. In the basement, while still handcuffed, Hon. Zaake was subjected to yet another round of torture that went on late into the night. He was sprayed in the eyes with an unknown liquid that has left him blind to date, and then beaten all over his body with several objects including what he suspects to have been a stick lined with barbed wire. He says it was later when he was mixed with other detainees that he learnt he was being held at CMI headquarters in Mbuya.

The following day, Hon. Zaake was transferred from CMI to SIU headquarters in Kireka, from where he has been detained to date. At Kireka, Hon. Zaake says he has been subjected to torture on a daily basis in a specialised torture chamber. At one point, his captors lifted him while on handcuffs, and threw him down hard on the cemented floor. They thereafter boxed and kicked him severely in the lower back, all the while insulting and asking him why he doesn’t leave politics.

Despite the worrying condition he is in, Hon. Zaake says he has been denied food, treatment, family access and legal representation for the three days he has spent in illegal detention so far. His demands to be taken to Court were equally rejected. It was only after Hon. Mwiru Paul accessed him and raised concern over his worrying condition that Hon. Zaake was yesterday evening taken to Iran – Uganda Hospital in Naguru below the Police Headquarters for medication. He remains in detention even at the hospital.

Hon. Zaake says that on several occasions while in detention, he has been forced to speak on phone with several high-ranking political leaders including President Yoweri Museveni who at one point furiously barked into the phone ordering him to leave politics. As a result, Hon. Zaake strongly fears that there is an imminent risk to his life should he remain in illegal detention, and should they continue denying him access to an independent health facility of his choice.

He is also worried about the safety of the so many people he found illegally detained in SIU and CMI torture chambers for years and months, including several journalists such as a one Katende of Voice of Africa who was abducted after publishing a story about how Uganda is handling the Coronavirus pandemic.