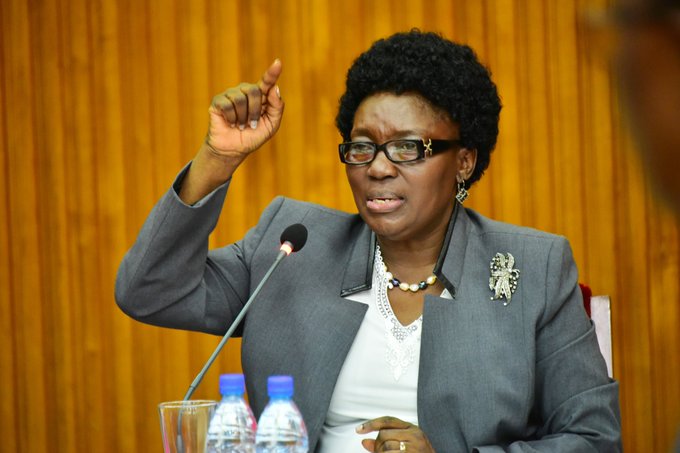 The fury fledged speaker of parliament, Rebecca Kadaga has referred the Kyadondo East legislator, Robert Kyagulanyi Ssentamu to the disciplinary committee for terming parliament COVID-19 package as a bribe.

While presiding today’s plenary at parliament, Kadaga was totally furious and in her worst moods as disclosed by one of the MPs who talked to us off record. “Her temper was wasp-like. She did not want to hear anybody tallimg about the shs 10b,” says the MP. “And when she learnt of MPs who rejected the money, she vowed to have them punished,” he adds. Kadaga’s boiling anger prompted her to direct the parliamentary disciplinary committee to punish the People Power head who she allegedly accuses of ‘insulting’ the August house by terming the package as a bribe. “Hon. Kyagulanyi breached parliament protocol. I direct the parliamentary disciplinary panel to deal with him,” Kadaga fumed.

From day one of the shs 10b debate, Hon. Robert Kyagulanyi Ssentamu is one of the legislators who rejected the proposal of giving each legislator a shs 20m package to fight COVID-19. The legislator even pledged to reject and refund the money should it be wired to his account. On Thursday, 23 April, he became the first MP to refund the shs 20m and on his refund sheet he termed the money as a bribe, something the Kadaga doesn’t want to see.

It should be recalled that a court order halted the transfer of funds to the legislators after MPs Jonathan Odur and Gerald Karuhanga lodged in a petition. The court order prompted Kadaga to invite the Attorney General, William Byaruhanga to guide the house on how a follow up on the cash would be made since it had been disembarked before the order came in. The Attorney General advised that all legislators refund the money and that banks should freeze their accounts. This sparked a verbal clash between the speaker and the Attorney General as Kadaga said the judiciary cannot step into matters of the legislature.