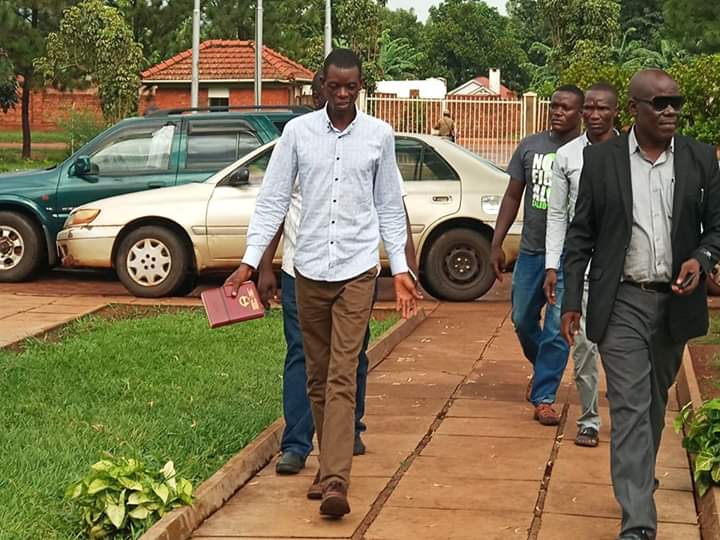 The notorious Jinja RDC, Erik Samuel Sakwa is to spend his first night in Kirinya government prison after today’s arrest related to manslaughter.

The short tempered Erik Sakwa was captured from Baba FM radio in Jinja town as he was issuing more threats to the public as he cautioned them not to breach Museveni’s guidelines. No sooner had Sakwa finished his statement than the authorities intercepted his radio programme and dragged him out of the studio. Sakwa pleaded for mercy as he begged the authorities to at least treat him like a president’s representative. “What have I done? Please don’t mistreat me,” Sakwa pleaded with the arresting officers. He actually had no clue of what could have triggered his arrest till he was told that the person he beat a night before had died. Sakwa is said to have brutally tortured a local businessman, Charles Isanga who later died the next day. His angry relatives eventually refused to bury him and asked police to give the body to the known killer (Sakwa Samuel).

Upon his arrest, Sakwa was arraigned before the Jinja magistrate’s court and charged with 3 counts of manslaughter, aggravated theft and murder. His other accomplices, Bazimbyewa Bumali, 19 and Mohammad Simba were also charged with the same counts.

In our earlier publications, we profiled Sakwa and brought to light his past cases of brutality. The former UPC youth leader has been harsh on the incumbent opposition politicians notably the FDC candidate, Kizza Besigye who he banned from Busoga. Sakwa also tormented a local People Power pastor, Andrew Muwanguzi who was abducted and beaten to pulp by forces acting under Sakwa’s command. Jinja residents have welcomed Sakwa’s arrest and have asked for a relieving heavy sentence to keep him away from their territory. If found guilty of manslaughter, Sakwa is likely to face a life sentence.