Jinja RDC arrest reminds me of very many before him, some on the run, in jail or dead- Besigye 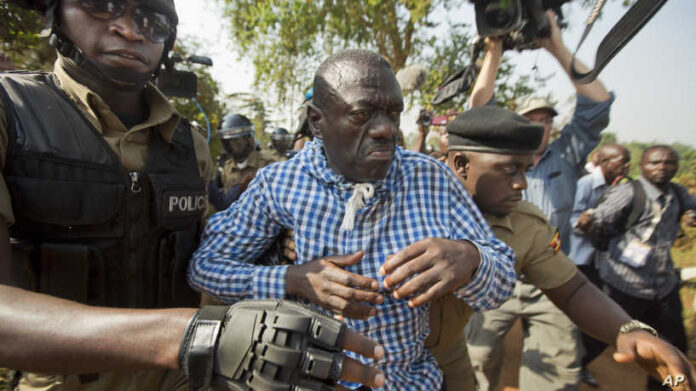 Four time presidential runner and the people’s president Dr. Kizza Besigye has said the arrest of Murderous Jinja Resident District Commissioner (RDC) Eric Sakwa by the officers from State House has reminded him of very many evil things he did to him of which some of them are on the run, in jail or dead.

Through his official facebook page, Besigye blasted him for brutally enforcing Museveni’s rule according to his will despite working to defend it’s wrongs.

It should be noted that Besigye has landed several times on notorious RDC Sakwa. Just in few month ago, Murderous RDC arrested Besigye and labelled him a desert locust who is an unwanted visitor in Jinja. Sakwa told the press that whenever Besigye visits, he causes chaos and that’s why he don’t want him in Jinja anymore.
“Whenever Besigye visits, He causes chaos and and we don’t want that in Jinja, that’s why he was arrested”. he said.

He therefore warned the former FDC president not to step Jinja District until further notice.

Murderous RDC has been remanded till 13th May 2020 to Kirinya Prison. He has been charged alongside Bumali Kazimbyewa and other persons. The state alleges that Sakwa and others caused the death of Charles Isanga.

Kizza Besigye post
“Jinja erupts in celebration after RDC Eric Sakwa is arrested, charged in court & sent to jail” a screaming headline!
Overzealous & brutal in enforcing his “master’s will” NOT serving Ugandans as by law established.
As a twist of his fate, he was arrested by officers from State House, that he seemed to believe he was acting in their interest.
Sakwa arrest reminds me of very many before him, some on the run, in jail or dead!
Time comes…