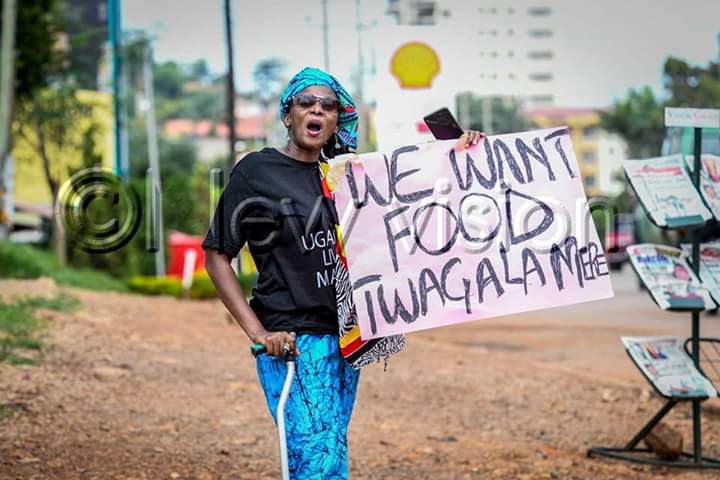 Namata Annette largely known by her alias Nana Mwafrika Mbarikiwa was today morning arrested by Kiira road police following a sole protest she staged on the Ntinda streets. Nana for the past days had warned of hitting the streets following her elevating impatience with the snail paced food distribution programme.

Armed with just her placards inscribed with “We want Food” wordings, Nana today camped at a street bus stop and decorated it with manilla papers. Donned in a black shirt labelled with “Ugandan lives matter”, Nana shouted at the helm of her voice prompting passers by to remove their phones to take pictures. Unlike on her 2019 Independence Day protest, Nana did not carry her nine months baby with her. An enraged Nana made a Facebook live broadcast on her platform which pulled her massive online attention with people commending her heroic efforts. In the livestream, Nana was heard asking the COVID-19 taskforce team to step up their food distribution efforts or else Ntinda residents are on the verge of starving. The viral livestream garnered several views and shares. In fact, it was being watched live the by top police bosses in nearby Naguru who later instructed the Kiira road DPC to effect her arrest. In about 30 minutes, the police brutally responded and dragged her off the streets. She was rushed to Kiira road police station where she remains as per knowledge of our sources on ground. Nana is to be charged with inciting violence according to the charge sheet our reporter has seen.

Ugandan urban dwellers contend that they have to date not received the food supplies. Student activist, Musiri David visited Nana at Kiira road police and approves that she had not been given anything for her tummy by 14:00hrs from the morning (10:00hrs) of her arrest. David was forced to buy her quick snacks to fill her hungry tummy. Her colleague and fellow activist, Dr. Stella Nyanzi condemned the arrest in a Facebook post in which she chronologically described how her friend has been a victim of police brutality. Stella recounts how Nana even lost a uterus to police extremists who battered her during a solo “Free Bobi” protest.

My sister, friend, comrade and ally, Nalongo Nana Mbarikiwa has been arrested by police and driven off to Kiira Road Police Station. The police found her in the middle of cello-taping handmade posters onto a bus-shade near her home in Ntinda. The posters read “We want food!”

Nana was in the middle of her one-woman peaceful protest. She was reminding the dictatorial government that poor Ugandans need food in the Corona lockdown.

Nana was previously tortured by police officers while she was conducting another one-woman protest against the illegal detention of Bobi Wine. Police officers beat her pregnant womb so badly that they deserted her unconscious at the Uganda-Iranian hospital. She lost her uterus. Her baby was born premature in June last year.