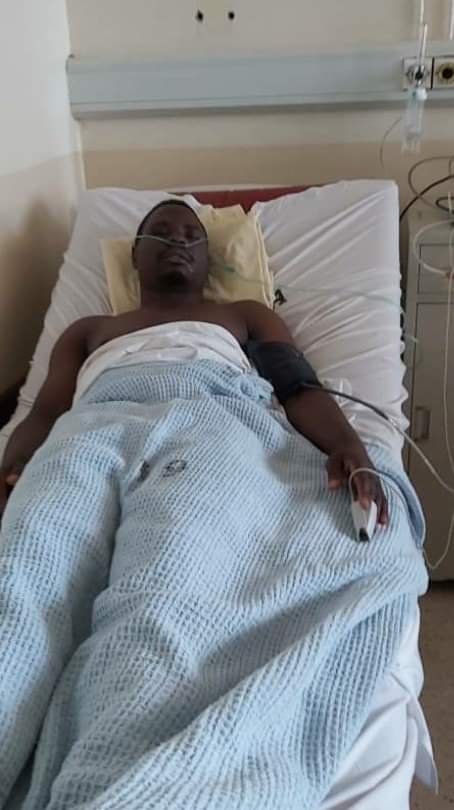 The Mityana municipality legislator’s health has further deteriorated at Kiruddu hospital where he is admitted under police detention.

Multiple sources with knowledge of what is happening say the People Power Power Deputy youth wing leader is now under life support machines. This follows the torture he received from police detectives led by Alex Mwiine who actively involved himself in handling the MP on the Sunday evening of April 19, when they were arresting him from his residence in Buswabulongo, Mityana.

Zaake’s worsening health condition has been confirmed by his colleague, Bobi Wine who in a Wednesday tweet reveals that Doctors are contemplating on taking him to intensive care. “Hon. Zaake’s health condition has worsened. He has now been placed on oxygen at Kiruddu hospital where he is admitted and still under police detention. The doctors are contemplating taking him into the ICU. A member of parliament is tortured to near death point by law enforces!,” Bobi says in a Wednesday tweet.

According to several sources, Hon. Zaake was tortured by security teams from the CMI (Chieftaincy of Military Intelligence) and the Special Investigations Unit (SIU) who held him at Mbuya military barracks safe house before his transfer to Kireka. In a narrative shared on the legislator’s Facebook page, he says his torture began right from when he was arrested up to Mbuya and Kireka where he was dumped. “He was brutalised by CMI and police. While they tortured him, they demanded he denounces Bobi Wine and stops opposing president Museveni,” Bobi adds.

Hon. Zaake’s ordeal was revealed by Jinja West MP, Paul Mwiru who was among the first people to visit him at SIU SIU Kireka. Mwiru says Zaake’s facial and chest flesh had been plucked out by his captors. He also adds that Zaake looked frail and his eyes could not open due to a chemical he was sprayed with while in custody. A police physician on Monday, April 27 advised police to take Zaake to an opthamologist at Nsambya but police instead took him to the Mityana magistrates’ court for trial. His lordship, Elias Kakooza rejected hearing Zaake’s case after seeing his dehumanized condition. Zaake wailed and groaned in the courtroom chambers as he was being carried by his captors. Even amidst this process, a Nakawa court order issued by the chief magistrate, Ruth Nabaasa was not heeded to by the police.

Much as police had wanted to jump out of the hot soup and leave the puzzle to be fixed by the judiciary, magistrate Elias Kakooza smartly saved the court’s image when he declined to handle the case. Police hurriedly rushed Zaake back to Mityana CPS where they tried to force him to sign a bond in which he was to appear in 7 days time regardless of how his health would be, as one of the terms. His lawyers rejected the offer while referring to the Nakawa chief magistrates’ court order that demanded for their client’s unconditional release.

Zaake remains at Kiruddu hospital in a tightly secure condition manned by heavily armed police officers. Whereas Enanga earlier refuted Zaake’s torture claims, his physical appearance is self evident to what People Power had said about their colleague.