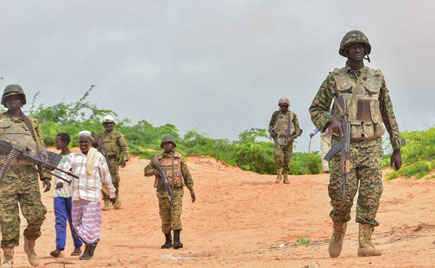 At least one yet to be named UPDF soldier in Mogadishu has contracted the Corona virus according to confirmed reports.

Several others who contacted him have also been forced to self isolate as a preventive means from spreading the contagion to the rest of the contingent. The unnamed soldier is said to have showed signs of a high fever, something that worried other personnel. He reportedly even fainted during an offensive launched in reprisal for the attacks on the Ugandan base which started last Saturday. The reports of a COVID-19 case was confirmed in a Wednesday presser at the Uganda Media Centre where the UPDF spokesperson, Brig. Richard Karemire addressed scribes of journalists. “One of our own soldiers has contracted the virus. His situation was detected during an operation when he reflected signs of the virus. He had a severe fever and even looked weak,” said Karemire. “Others who contacted him have been quarantined to avert further spread of the virus,” he added.

UPDF currently has about 5579 troops in Somalia since 2006 when they were first deployed as part of the AMISOM, a peace keeping body.

The war torn horn of Africa country has been in anarchy from 1991 when the autocratic government of Mohammad Siad Bare was deposed in a popular uprising. Corona cases currently stand at 480 according to a statement issued by the country’s health ministry. Health experts warn if a possible case explosion as several undected cases are mixed within the population. The country confirmed its first Corona virus death on April, 8 2020. Being one of the world’s poorest countries with the worst healthcare system, WHO experts warn of possible fatalities that will arise especially with the war continuously ravaging and targeting health facilities.