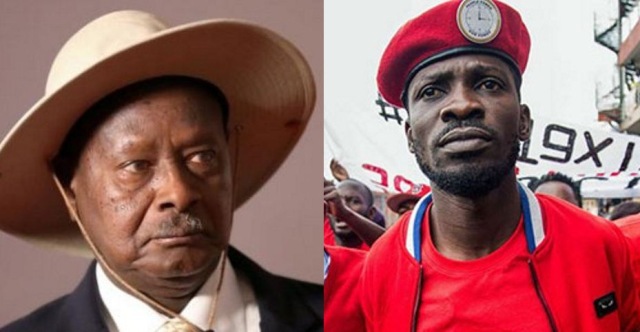 A fresh war has sparked in the NRM MPs WhatsApp after majority disagreed with Museveni’s demonizing remarks on the COVID-19 money during his TV address where he attacked them for their greed and insatiable appetite for money. The NRM MPs claim Museveni has abandoned them after all they have done for him.

We have since learnt that the NRM MPs now regret passing the age limit and have already vowed to mobilize for the People Power strongman, Bobi Wine and this stems from Museveni’s ridiculous covid cash comments.

The disgruntled NRM MPs have since expressed fury and rage at their party chairman, Yoweri Museveni over his recent comments on the shs 10b cash.

The NRM MPs ranted throughout their private WhatsApp platform code named “317 Heroes” to signify the members who voted yes for the controversial age limit that gifted Museveni an extension of his three decade rule. In some of the screenshots reviewed by this site, the NRM MPs who had already used the shs 20m cursed at Museveni for describing them as “purchasing officers” during his Tuesday address. The MPs also questioned how Museveni’s directives on the money rhymed with the high court judge, Michael Elebu’s judgement. They stress that Museveni could have biased the ruling.

Their other area of concern was how Museveni out of the blue grilled them for receiving the shs 20m yet it is similar to the shs 29m age limit bribe. “It appears that he is no longer interested in us, he wants new ones, he has become very unreliable,” an MP said in the group. “We have been abused by the public. Our lives are in danger because of him and this is how he decides to pay us?,” he adds.

One of the angered legislators could not hold his rage and decided to renamw the WhatsApp group from “317 heroes” to “Bobi Wine Mobilizers 2021” and went ahead to replace the group icon with the Kyadondo East legislator’s photo. It should be recalled that Bobi Wine was the first MP to reject the shs 20m and termed it a bribe. Bobi’s instincts would later rhyme with Museveni’s who acknowledged the money as a trap that MPs ignorantly fell in.