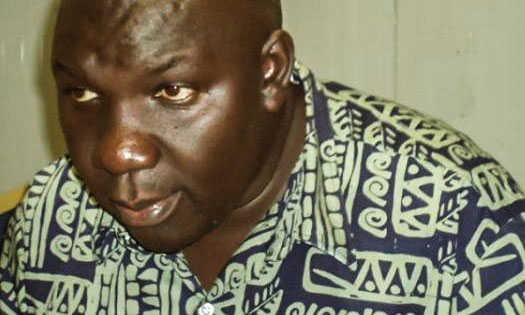 The police spokesperson, Fred Enanga was on Thursday evening forced to flee Rubaga hospital after Zaake’s relatives chased him away when he forced an unwelcome visit. The master of deception begged to stay but all his plea fell on deaf ears.

“Enanga boldly said Zaake was not tortured. Why has he come to see him at the hospital then?,” wondered one of Zaake’s supporters. “Next time he has to be sure of what he tells the public,” he adds. Zaake’s supporters further advised him not to get any closer to Rubaga hospital.

Enanga’s unwelcome visit was cut short from the ward room door when the hostile Zaake’s supporters surrounded him and politely asked him to vacate. He however tried to stage some resistance as he begged to be allowed to at least see the patient but all this fell on deaf ears as the masses maintained their stand. Afraid of creating a media stunt as people were gathering and the noise in the hospital was escalating, Enanga shyly left while shaking his head. “Friends, I am just visiting. I don’t want to cause a scene,” he begged as he walked away. His two guards helped him through the swarm of people and led him to the waiting police pick up which drove off at break neck.

READ ALSO :Zaake wanted to escape, that’s why he was tortured-Enanga

On the April, 25 about five days back Fred Enanga refuted claims that the Mityana MP was tortured in their custody. He dismissed those reports and reduced them to propaganda by the opposition to score political points. “There is not anything at this stage to properly say that he was poisoned or tortured. We don’t have any such complaints,” Enanga said. “He was unwell and it was agreed between his lawyers, police surgeon and his doctor that we take him to Iran-Uganda hospital and his wife was able to join us,” he added during a press briefing. A day after Enanga’s statement, Zaake was arraigned before the Mityana magistrates’ court presided by Kakooza Elias who rejected to work on him due to his poor health. The legislator was wailing at the time of court. He is currently hospitalised at Rubaga hospital but in a fragile condition. He is bruised with marks of ropes and his eyes have not yet opened because of the police pepper spray.