Arua nurse who wheeled a patient to hospital rewarded 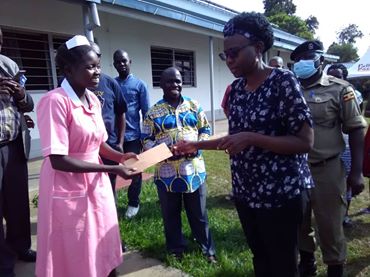 Doris Okundinia, who wheeled a patient for about 2Kms from Ediofe clinic to Arua Hospital has finally been rewarded. The nurse was even condemned and summoned by the District leadership of Arua for wheeling patient to hospital, but surely her rewards from the health Health Ministry awaited.

The patient had reportedly waited for an ambulance from the District Health Office for many hours in vain.

According to information obtained from the health centre, Okundinia was assigned to take care of the patient who came from Vurra at around 7 a.m. and realizing that his condition was worsening and needed further management, she called the District Health Officer Dr. Paul Drileba to provide for an ambulance.

Okundinia said the DHO promised to send an ambulance but she waited for it in vain prompting her to find means to deliver him to Arua hospital. She rolled the wheelchair for 2 kilometers to get to the hospital.

Now, the nurse has been lauded by the health minister Dr. Jane Aceng who equally handed her cash reward in an enclosed envelope.
Dr Jane Aceng is currently on a tour of regional referral hospitals across the country.