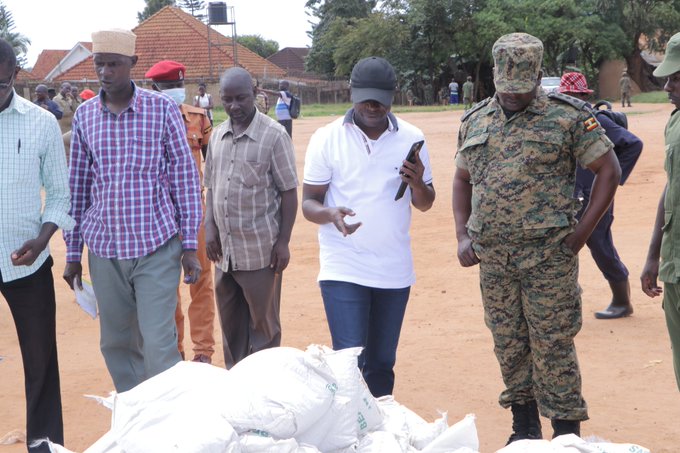 As the debate around the quality of food relief continues to linger within the public, today morning the state minister for ICT, Peter Ogwang has rejected an assortment of beans over quality concerns.

The beans were meant to be supplied to the residents of Nsambya central parish in Makindye division. Residents say these stone-infested  beans take ages to get ready. “I have to use too much charcoal to get a meal out of these beans,” says Namusoke, a resident of Kimwanyi. In a tweet he made yesterday, Hon. Peter Ogwang appealed to the Uganda National Bureau of Standards to be keen and observant with the food samples they certify for consumption. “Today we had to recall some of the beans meant to be given out to some zones in Nsambya Central Parish because it was not gold enough for consumption. @UNBSug might have to up their game on quality control. I am heading to meet them about the same,” reads the tweet. It seems the bureau chief, Dr. Manyindo is overwhelmed with the stocks of food jetting in to his stores. He is exhausted and probably clearing without ascertaining the quality of the food. In his popular TV political talk show, Tamale Mirundi had warned Ugandans of the looming negligence at UNBS due to the influx of stock flooding in. “I know Dr. Manyindo will reach a point and vent path to whatever comes his way,” Mirundi warned. “As far as I know, he doesn’t even have the equipment to certify all that food on short notice,” he added during his One on One show on NBS TV.

The food debate was authoritatively ended by the speaker of parliament, Rebecca Kadaga who angrily confirmed in a presser that Ugandans were being fed on rotten beans and expired milk. Kadaga turned a whistleblower after falling out with the executive arm of government led by Museveni over the shs 10b that was forcibly removed by court.