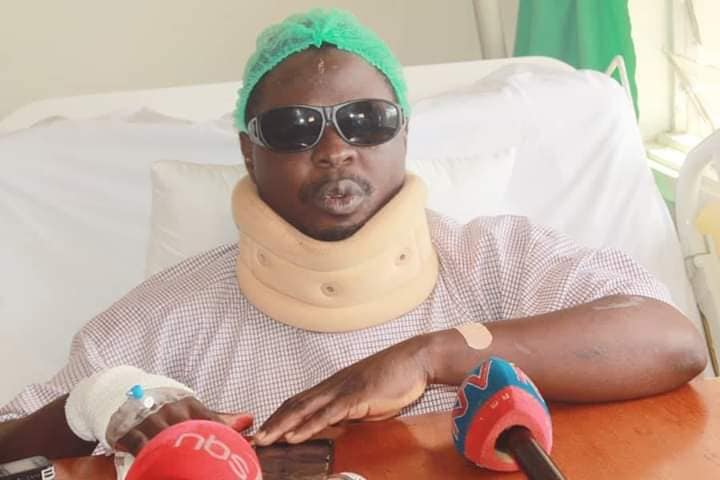 The embattled Mityana municipality legislator has today addressed media for the first time since his arrest on April,19 at his Buswabulongo residence.

Addressing swipes of journalists from Rubaga hospital where he is admitted, Zaake tearfully narrated his torture ordeal while he was still in security custody at Standard Investigations Unit (SIU) in Kireka and the Chieftaincy of Military Intelligence (CMI) Mbuya. Zaake says he was placed on gun point and forced to denounce his support for Bobi Wine and People Power.

“My captors forced me to swear allegiance to Mr. Muhoozi Kainerugaba, or else I would be killed,” Zaake told the press. “This is the worst torture I’ve faced in my lifetime,” he added. He also adds that while in custody, he would be subjected to daily beatings instructed by a one Twesigye Amudan who even asked him to quit politics and concentrate on his family’s business. His captors argued that regardless of what Zaake does, Bobi Wine ‘would never’ rule Uganda because it was Museveni’s succession is highly decided on his own son, Muhoozi Kainerugaba.

The legislator adds that he would be switched from one torture point of CMI to another belonging to SIU daily. ‘I would be handcuffed from behind, suspended in air to dangle, slapped, kicked and pepper sprayed in the eyes,” he says. “Twesigye Amudan had orders of inflicting lifetime harm on me. He was asked to blind me with chemicals,” Zaake adds.

Zaake says after several days of rotations from one torture point to another, he was led into another cell where he met dozens of Ugandans who are mainly activists and political prisoners. He says while here in a piled cell, he was able to note the presence of Katende, a Voice of Africa journalist recently captured in Kamuli for reporting about COVID-19 in the Eastern region.

They shared with him their ordeal and all intimated that they are inhumanely tortured on a daily basis. Some confessed they have been in state custody for several years without appearing in court. Ekyooto understands that most of these prisoners are not arraigned in courtrooms because their arrests are illegally conducted. Our survey reveals that majority of Ugandans in safe houses are smartly abducted by the state machinery. Zaake further adds that he would be fed on just a cup of porridge daily and no family member would be allowed to access him.

Only his comrade Mwiru was allowed to see him after a court order had been issued by the Nakawa magistrate. Zaake says the day he shared with Mwiru his ordeal, he was tortured throughout the night by Twesigye who ordered a one Amos Kagoro to cut him with sharp edged objects on the chest.

The legislator confirms that he is to individually take on his perpetrators as his People Power movement earlier revealed last week. Zaakw remains bedridden at Rubaga where ophthalmologists are striving hard to regain his lost sight. His eyes are said to have photophobia(fear of light) which has made it impossible to examine his optical condition. The legislator also suffers acute migraines on top of excruciating back pain.