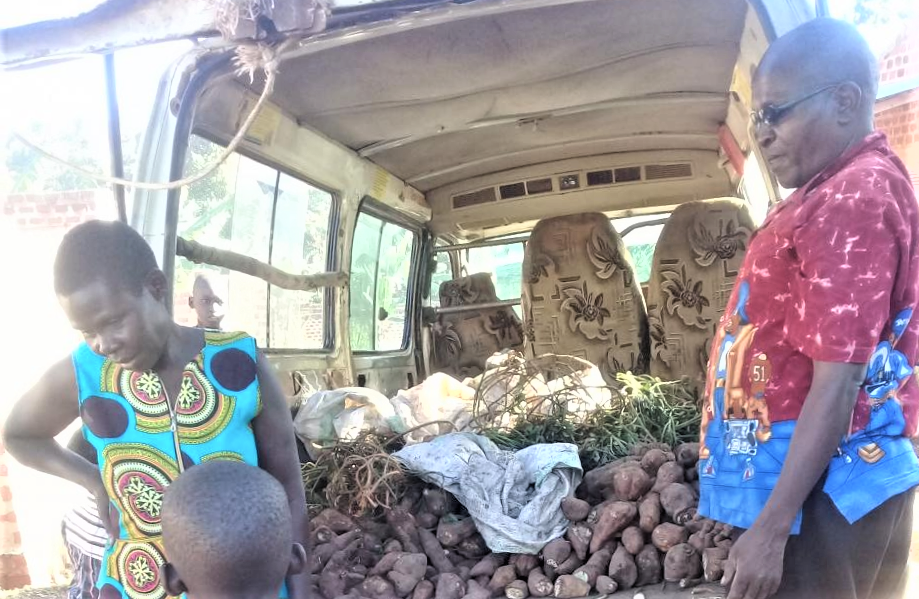 When government suspended public transport as part of the measures against the spread of Corona Virus, taxi operators were left with no option but to pack their vehicles. Thousands of operators were caught off guard without any money to take care of their families.

Some of the operators resorted to menial jobs to fend for their families while others appealed to government for food relief. 50-year-old Dan Mubiru plies the Kampala-Kawanda route. He only had Shillings 100,000 when president, Yoweri Museveni announced the suspension of public transport.

According to Mubiru, he used the money to buy food for his eight-member family. However, two days later, Mubiru realised that he needed another source of income to keep him going through the lock down.

Mubiru decided to use his taxi to vend food in his neighbourhood. He removed seats from his vehicle to create space for the sweet potatoes he was to start selling. He started with one and a half-sack of potatoes that he bought from traders in Matugga in Nansana Municipality in Wakiso district.

Sometimes there are a lot of rotten potatoes, which reduces his profit margin. Mubiru, who resides in Kawanda vends the potatoes in Kawanda, Kirinnyabigo and Namalere in Nansana Municipality.

Mubiru moves with his 15-year-old son who calls customers shouting “Lumonde” a Luganda word for sweet potatoes on top of his voice. Mubiru’s business has also grown as he now stocks five sacks of sweet potatoes and two of cassava.

He no-longer buys his stock from traders and goes directly to farmers. In a day, he can sell three sacks in a whole. Nevertheless, Mubiru meets a challenge as traffic police officers stop him thinking he is operating a taxi business.
While running a taxi, Mubiru would earn at-least Shillings 60,000 a day. He is waiting for the suspension to be lifted to return to the transport business. His taxi has suffered minor damages operating on bumpy roads. He says he would have to service the van before putting it back on the road.

Mubiru’s story is not any different from some other drivers. Joseph Ssebukalu, a taxi driver in Kas Club Taxi Park in Bwaise has resorted to working as a builder. Ssebukalu, who had told URN in an earlier interview that he had saved enough to run his family, now says the suspension has taken longer than anticipated forcing him to find a source of income.

Ssebukalu who also doubles the chairperson of his park, says he has mobilized his colleagues to start working at a construction site at the park to earn some money to provide for their families. He walks from his home in Nabweru to the construction site.

He describes his current job as tough but necessary.

Ssebukalu earns Shillings 10,000 daily from his current job. While operating as a driver, he earns between Shillings 15,000 and 25,000 daily. Richard Kiyaga, a driver on Entebbe Road and the Chairperson Entebbe Road Stage, says a number of his colleagues are engaged in different jobs at construction sites, food stalls and retail shops among others.

The government first suspended Public transport for 14 days on March 25, 2020. The suspension was extended for 21 more days before the earlier one could expire. The current lock-down expires on May 5th, 2020.