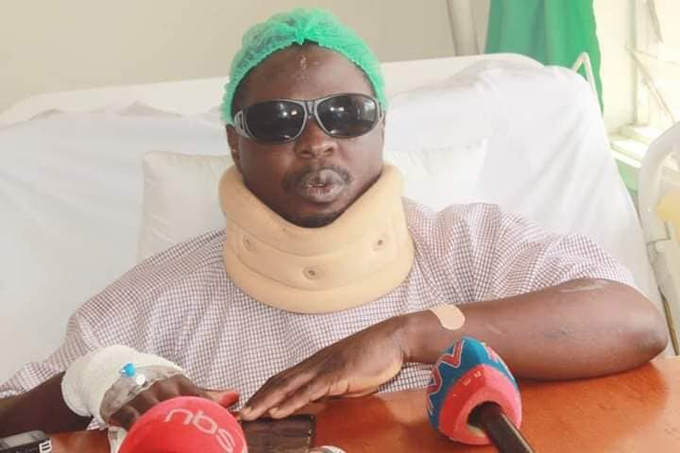 The debate around Zaake’s torture has taken a new drift after a police report read by the state minister for internal affairs, Obiga Kania claimed he deliberately tortured himself to tarnish the image of the government.

A lot of lies and spinned narratives are being peddled to hoodwink the public and mainly the donors like the European Union and US embassy which tasked the Museveni regime to explain what they had done to the legislator.

Analysis of the Government report

Police says Zaake was peacefully arrested and detained at Mityana CPS at 7:13pm and that while there, he freely interacted with other suspects. The initial detention point is factual but the mode of arrest is a pure lie given the photos of vandalised doors of his house which portrays the fierce approach used by the RPC Bob Kagarura and DPC Alex Mwiine at the time of the arrest.

Police claims Zaake resisted the arrest but this is contrary to the footage widely televised showing a peaceful compliant Zaake walking swiftly into the waiting police patrol vehicle.

The worst bit of the police version is the pure lie that Zaake held tightly onto the metallic bars of the cells while he was being dragged. The bruises on Zaake’s limbs and hands clearly corroborate with his narrative of being tied with tight ropes.

Uganda police as an institution has an unmatched history of violence. There are several footage all over the internet showing misconduct of the men in uniform. Away from that, it is common sense that a handcuffed person cannot at any point fight off 23 gun wielding men. The police statement turns out to be an overly insensitive response meant to justify their gross human rights abuse. The 2019 brutal murder of Hakim Ssekamwa by a reckless police patrol UP 2525 in Luweero district and a similar 2020 murder of Ritah Nabukenya are all lively examples of police excesses.

Zaake was merely spared by his position as MP but there are several Ugandan youths who’ve succumbed in custody of police. Several reports of murder committed by police have been profiled by the local Ugandan media. How would a handcuffed person hurt his own eyes? At least police should own the pepper spraying, we urge.

Enanga as an individual is a regime spin master who is known for issuing controversial statements as seen in the Zigy Wine report that claimed he had died of accident injuries yet his body clearly showed he was tortured. The most recent incident is of the murder of Vincent Serunji by a one Wafula Stephen (police constable). In this particular case, Enanga claimed the deceased Serunji was shot because he tried to attack the officers on curfew duty but several weeks later, a whistleblower leaked a footage showing the deceased was shot in broad daylight and moreover on whe he was lying on the ground at the time of arrest.

Our analysis therefore sides with Counsel Nicholas Opio’s earlier cautions that there was no way police could give a none-biased report. It was common knowledge for them to conceal sensitive information like how they colluded to hide the CCTV footage which captured the last moments of Ritah Nabukenya’s murder. The same police could not retrieve CCTV footage showing how Dan Kyeyune was fiercely gunned down by the LDU in Nansana. Zaake’s perpetrators are clearly known to the public and will be brought to book if only an independent human rights body conducts the investigations.