EXCLUSIVE: CID boss Akullo held us captive in Kololo for 48 hours, ordered for our shooting 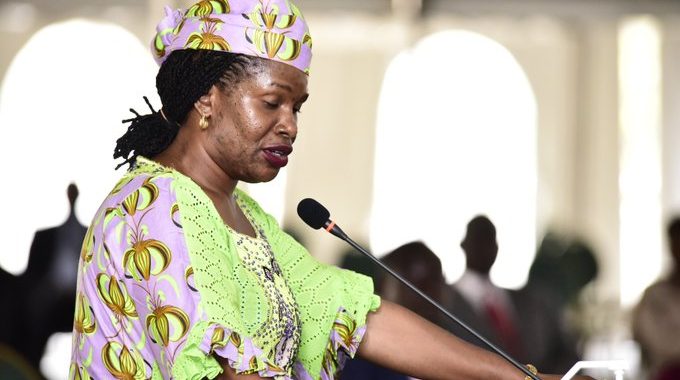 Tororo North MP, Annet Nyakecho has narrated her ordeal to parliament following her recent release from CMI custody where she lasted for several weeks as security grilled her to explain her links with Gen. Tumukunde, a presidential contender jailed to-date.

READ ALSO: MP Nyakecho, 9 Others questioned Over Meeting with Tumukunde

Nyakecho burst into tears as she drew back to Tumukunde’s Kololo residence where the arrest story begins. Nyakecho says she was arrested alongside her two brothers (one who drives her and the other who does the personal assistant job) and her husband, Levi Otim Akonopeesa.

Nyakecho says they were raided on a Thursday evening at Tumukunde’s house where she had just concluded a meeting regarding his political future. She says they were stormed and held captive at Tumukunde’s residence for a couple of days. While she gave her account and empathetically stood with Hon. Zaake, another tortured legislator, a section of NRM MPs were just laughing and shouting ‘steady progress’ slogans. Nyakecho reminded them that anybody could fall prey to the brutality of the armed forces. “Today it’s me, and tomorrow it’s you,” Nyakecho told the restless NRM MPs. “Is this country ours? Are we foreigners madam speaker,” Nyakecho cried out to Kadaga.

She says while in custody, she was slapped daily by one of the security personnel(OC) who forced her to sleep on the cold cement floor as a punishment for her inquiry into the presence of the Chinese nationals who had been smuggled into her detention cell at midnight. Nyakecho says she was frightened by the presence of the Chinese in her cells because these were the times COVID-19 was highly linked to these Asian nationals. She adds that she regretted having voted for the lifting of the age limit that extended Museveni’s monstrous rule. She went on to wonder what other speechless Ugandan youths she saw detained in security custody go through. “I’m lucky that as an MP I have a platform to report all this. But how about the ordinary youths who are grabbed daily off the streets?,” Nyakecho questioned. She says while in custody, she was denied food and visits from her own relatives.

“Is it fair to maltreat me and subject me to torture because I support a candidate in the names of Gen. Tumukunde?,” Nyakecho asked. “Doesn’t the constitution allow people to contest every after five years?,” she adds. “Why don’t we just get the constitution and bury it then we know we are living in lawlessness?,” she angrily added.

Why she was arrested

When she asked about her arrest, Nyakecho says she was informed that she had obstructed a police operation that was meant to capture Gen. Tumukunde. She adds that on the arrest date, fiercely dressed security personnel numbering to hundreds sealed off Tumukunde’s Kololo home. She wonders how she would have the courage to stop all those men as police claims. “Can you obstruct such men who are ready to shoot at you?,” Nyakecho asked. “Actually I remember Akullo the CID lady giving a shoot to kill directive. She had put us under house arrest for 2 days,” Nyakecho says.

Nyakecho is not the only Ugandan MP to face the brutality of the armed forces. Apparently, the Mityana MP Zaake Francis is still nursing lifetime injuries sustained during his April,19 arrest. In the controversial report read out to parliament on Thursday, state minister for internal affairs Obiga Kania distanced the forces from anything like torture and claimed it was Zaake who handcuffed and injured himself.