Mwenda apologises to M7 over shs 5b scandal 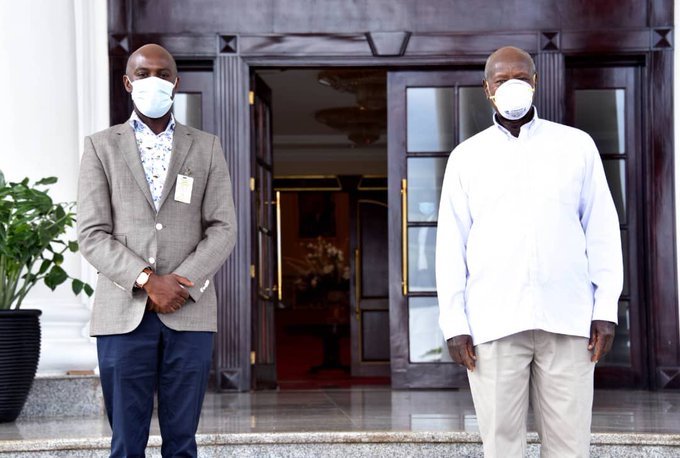 The embattled veteran on Friday noon met with Museveni at state house Entebbe after days of pleading for a platform.

Our reliable sources say Mwenda’s gap was bridged by his nephew, Canary Mugume who works with the Kamwokya based NBS Television. Mwenda proposed to Canary to come up with a one on one interview with Museveni specifically to ask him about the fate of the 2021 presidential election which seems to be hanging in thin air. Mwenda would later disguise as a member of Canary’s press crew so he would be allowed entry to State house.

Sources say Museveni was at first furious with Mwenda’s presence and nearly asked the SFC to kick him out. It took collective efforts of Mwenda’s sympathizers led by Canary who pleaded with Museveni to spare his former advisor.

It is after that scuffle that Canary initiated a dialogue between the two former tight comrades. In the meeting, Museveni unsympathetically asked Mwenda to return the shs 5b he had looted from the Central bank a fortnight back. A disgruntled Mwenda displayed the paperwork showing he had returned the money about three days back. “Your excellency, I returned the shs 5 billion already. I’m here for an apology sir,” Mwenda was quoted pleading. “I was misled your Excellency. I won’t do that again,” he added.

By closure of the meeting, Mwenda was given two tough terms that our sources are yet to establish. We learnt that in one of the terms, he was asked not to go back to the office of the prime minister till COVID-19 ends. It is rumoured that he was colluding with the Vision group CEO Robert Kabushenga to make fake accountability for the fundraised money. Mwenda and Kabushenga are said to be providing false figures.

It should be recalled that the same Mwenda lost ties with Kigali after being kicked out of Kagame’s advisor’s list. Rwanda accused Mwenda of playing double standards in a bid to sustain the Kampala-Kigali cold war that sparked in 2019 when the two East African nations disagreed with the other over rebel activities in the Eastern DRC. The two nations accuse each other of plotting to overthrow the legitimate government(s).