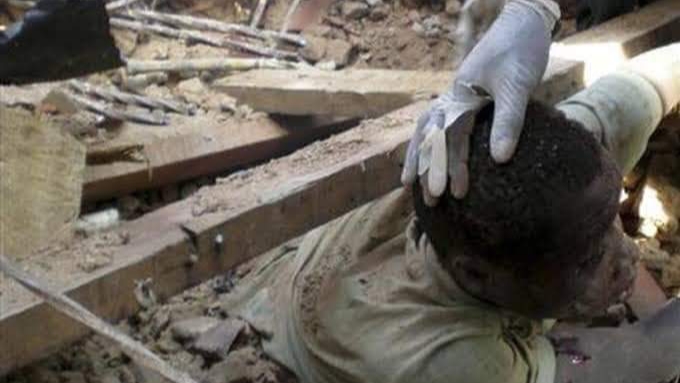 Rescue efforts are going on to save some of the Builders. The exact number of lives lost has not yet been ascertained but it is estimated that more than 20 builders were in the building.

Three people have been rescued alive from a building that collapsed on Saturday evening at Kiwempe Zone in Kansanga in Makindye Division in Kampala. One of those rescued has been identified as Alex Kabanda, according to the Deputy Kampala Metropolitan Police Spokesperson, Luke Owoyesigire.

Godfrey Okobo, an Officer from the Police Fire and Rescue Department, says those rescued from the rubble were taken to Mulago Hospital for medical attention. Okobo, who is commanding the rescue operation, says they suspect 10 more people are still trapped under the building, adding that they are doing everything possible to rescue them.

The Makindye Division Mayor, Ali Mulyanyama, says KCCA has suspended the construction of the  building which had reached the fourth floor, because of shoddy work but the owner took advantage of the Covid-19 lock down to proceed with the works.

He told Ekyooto that no suspect has been arrested in connection with defying the suspension of the construction.  “No one has been arrested so far. What is being done now is to rescue the lives of people first as police carries out its investigation,” said Mulanyama.

A team of officers from the Police Fire and Rescue Services are already at the scene trying to retrieve those still stuck in the rubble. The officers have teamed up with the National Building Review Board and KCCA to ascertain what really caused the building to collapse.