Police Deploys in Old Taxi Park As Renovations Kick Off 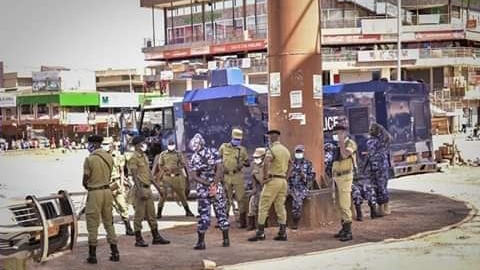 There is heavy police deployment around old Taxi Park as Kampala Capital City Authority-KCCA embarks on the renovation works.

Police has deployed dozens of police officers and water cannons in the park to provide security to the workers of Sterling Civil Engineering Ltd and Kiru General Services Ltd, who are undertaking the renovation.

The deployment was prompted by threats from taxi operators opposed to the works and had mobilised to stage a demonstration. Yasin Mahoro, a driver on Entebbe stage who also runs a shop in the park, says they are not opposed to the project but say there is a hidden agenda to displace them.

Mahoro says they should have been notified earlier so as to can prepare for the times ahead before kick starting off the works. He says the decision by government to develop the park at a time when taxi operators are hoping to start work after lockdown is inconsiderate.

A number of taxi operators were seen standing on the streets around the park and murmuring about the project. They are worried that the facility could be turned into a park for the KCCA Bus project, as rumored.

“These people are heartless. The moment we leave, they will demolish everything and displace us” said one taxi operator who had come to ask his colleagues if they have heard any news.

Operators say KCCA could demolish structures in the park that house different shops. They have threatened to strike if the park is fenced off.     But the acting KCCA Executive Director, Andrew Kitaka, says the scope of work will include excavation and disposal of the existing material, installation of underground drainage line, rock fill and construction of new foundation layers for the carpet. The new carpet will have markings to delineate areas for parking, taxis and pedestrian movement. The boundaries of the park will be retained to prevent mud from washing onto the carpet as has been the case. There will be lighting and some waiting sheds for passengers.

The project is expected to last three months and if the lockdown is lifted before works are completed, KCCA say they will find alternative space for taxis to operate.