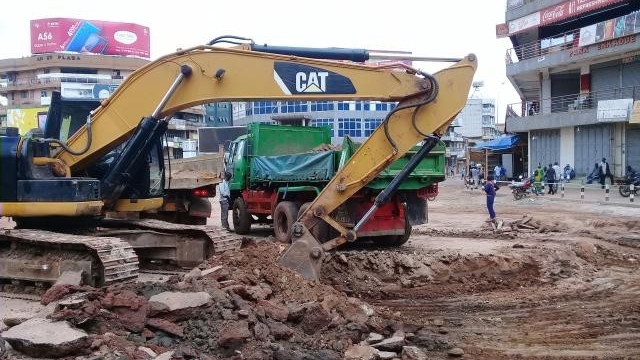 By midday, the graders from by Sterling Civil Engineering Ltd and Kiru General Services Ltd had completed excavating the section near Park Enkadde Plaza. Drivers who spoke to Ekyooto said they arrived at the park as early as 5am to ensure the excavation doesn’t start without their consent but found the park under tight police guard.

They said they are suspicious that the park could be turned into city Bus Park or something else. Tonny Mugerwa, who claimed to be a taxi driver, said they have been informed that KCCA has finalised plans to eject them from the park. Mugerwa said they had come to ensure the excavation doesn’t start before they engage KCCA but they were overpowered.

“We are now waiting to see what will happen by end of this week. The way they are digging this park worries us. We are not sure whether it will remain a taxi park or it is going to be turned into a building,” Mugerwa said.

Emmanuel Musajja, another driver said they will keep monitoring the situation day and night to ensure no building is erected in the park. He said they will do whatever is within their means to ensure that the park remains for taxis. On Monday, the taxi operators opposed to the development confronted Police and KCCA officials.

Yasin Mahoro, who participated in the protest, says they had received information that there was a hidden agenda to displace them. Although the taxi drivers said they wouldn’t allow the park to be fenced off, the workers of Sterling Civil Engineering Ltd and Kiru General Services Ltd told Ekyooto on condition of anonymity that they will still have to do it.

“We want to stop people walking through this park as they are disorganising our work. We are going to fence it off tonight. We want to finish this work very fast and we can achieve this when we are protected from public disruptions,” one of workers said.

Andrew Kitaka, the KCCA Executive Director, said the scope of work will include excavation and disposal of the existing material, installation of underground drainage line, rock fill and construction of new foundation layers for the carpet.

KCCA said the new carpet will have markings to delineate areas for parking, taxis and pedestrian movement. The authority also said boundaries of the park will be retained to prevent mud from washing onto the carpet as has been the case. KCCA also hopes to improve lighting and some waiting sheds for passengers.