LDU Officer Kills One, Another Hospitalised in Kween District 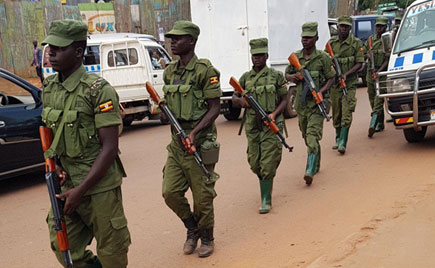 Chemusto is hospitalised in critical condition at Kapchorwa General Hospital. According to police, the shooting occurred on Sunday night in Kapkwata village when LDUs who were enforcing curfew found the deceased and twelve other people playing cards at his residence.

READ ALSO: LDU breaks into family’s home, flogs all and walks away with food

Fredmark Chesang, the Sipi Region Police Spokesperson, says the LDUs tried to arrest the group but Mwanga put up resistance and tried to hack the LDUs with a machete prompting them to open fire. He said one bullet hit Mwanga and injured Chemusto as well.

According to Chesang, the LDU whose name has been withheld was picked by police and handed over to UPDF 3rd Division to answer murder charges. Maj Telesphar Turyamumanya, the UPDF 3rd Division Spokesperson told Ekyooto that they are investigating circumstances, under which the LDU shot at citizens, saying he will appear in the court martial when investigations are complete.

This is the second time within a space of a week an LDU personnel is shooting civilians. On Friday Last week, private Robert Miyaga opened fire and shot Edward Musaasizi, the Chairperson of Lutovu Village in Malongo Sub County in Lwengo district and Jacqueline Asasira along Kampala road next to Byansi Pharmacy in Masaka town.

He opened fire at his victims as they were boarding a motorcycle killing Musasizi on the spot. Asasira died shortly after being rushed to Masaka Regional Referral hospital.  Miyaga later took his own life.