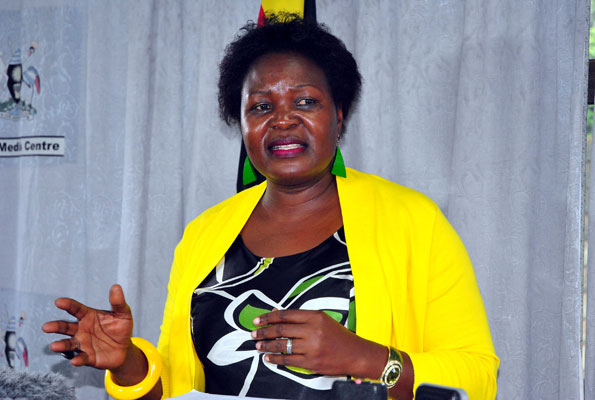 In the ongoing parliament Tuesday plenary, the government chief whip, Ruth Nankabirwa is bribing fellow members of parliament to lure them into pronouncing Museveni as the covid 19 hero.

Our sources at the ongoing session say, Nankabirwa is giving out between shs 5-10m to each individual member of parliament of they can support the move and give Museveni a local boost in this impending covid 19 crisis. The long time Kiboga woman MP wants Museveni to level with Bobi Wine in COVID-19 heroism. She’s angered by the latter’s persistent international victories over being fundamental in the covid fight. “How does this young man who has just entered parliament beat a man who has been president for three decades? What does Bobi Wine have and who is he?,” wonders Nakabirwa.

A reporter covering the session authoritatively tells Ekyooto that Nankabirwa received the whopping funds during a recent interface with Museveni at State House. The money could have been deducted from the state house expenses as a means of buying back the lost favour of MPs. Sources say Museveni regrets his previous comments on the legislators when he bashed them over what he termed as a morally reprehensible act when the legislators allocated themselves with shs 20m each to support their COVID-19 efforts.

Away from Nankabirwa’s push for Museveni’s forced covid heroism, our sources at parliament say there is an ongoing move to censure the Agriculture minister, Vincent Bamulangaki Ssempijja over government cattle scandal in which MPs seek answers to how over 300 animals went missing on the state farm. In other developments, Minister Obiga Kania is to further elaborate on his report disputing Zaake’s torture. Also on the order paper of parliament today, is the silent collection of signatures to oust Deputy Speaker, Jacob Oulanya from his position of Deputy Speaker as MPs accuse him of abstaining when parliament was under attack from other arms of government.