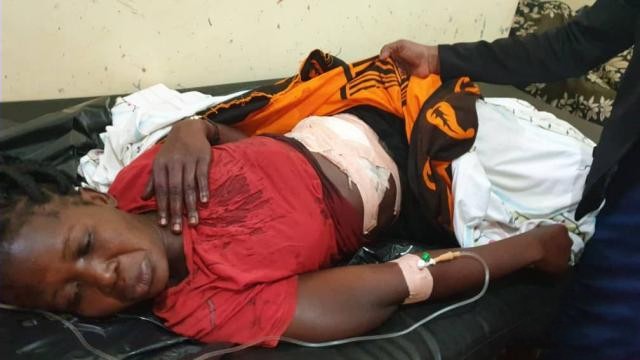 A food vendor in Jinja central market is nursing bullet wounds at Jinja Regional Referral Hospital after being shot by police patrol.

Evelyn Namulondo was heading to amber coat market from her home in Budhumbuli ward around 5am to purchase fruits when she was shot by police in the abdomen.

Namulondo says that she was traveling alongside another passenger on a motorcycle when police officers intercepted them along Kyabazinga way, but the motorist declined to stop, prompting them to fire at them.

“We begged the Boda boda man to stop but he refused, which I think angered the policemen to shoot at us. I fell after sustaining injuries. The motorist sped off with the other passenger and all I recall is that, police officers dumped me here,” she said.

A health worker, who spoke to Ekyooto on condition of anonymity, said they had managed to retrieve the bullets from the victim’s abdomen and she is currently out of danger.

“Her sensitive organs weren’t affected but we have already removed bullets and cleaned the victim’s abdomen. We have also dressed her wounds and the intestines are safe,” the source said.

Abby Ngako, the Kiira Region Police Spokesperson confirms the incident, saying a team of detectives has been dispatched to investigate the matter.  Uganda is still under curfew, which starts at 7pm and runs until 6:30am.