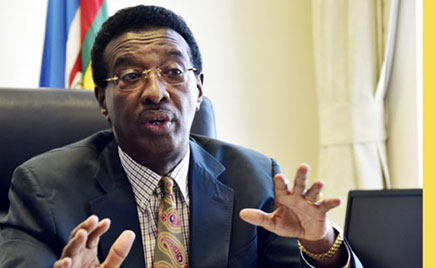 Police in Rukungiri have arrested a team of NRM officials who were in possession of maize flour of about 170 bags which was stolen from the district COVID-19 stores.

According to the Kigezi regional police spokesperson, Elly Maate among the detained is a personal assistant to the ex minister, Jim Muhwezi. This gentleman has been identified as Isaac Nuwamanya locally known as ‘Kaharuza’. He had conspired with other two NRM Rukungiri district officials to execute the loot. The other duo are Tukamuhebwa Robert, the district NRM publicity secretary and Kansiime David Rusheshe.

The trio are said to have smartly loaded over 170 bags of posho to a pick up truck UBB 657F without the consent of the district taskforce team.

After driving off with the bags of the relief food, they deposited it at Kansiime’s residence and repackaged it to hit the market stalls.

When the ex Minister, Muhwezi was contacted by the local Rukungiri press for comments about the implication of his blue eyed boy Isaac Nuwamanya, the ex Minister plunged in shock could not believe that his aide had involved in such thuggery. The now serving NRM district says he only knows Isaac in their official district party work and that he has no idea of how he involved himself in the said thuggery. He however appealed to Rukungiri locals to remain calm and divorce from making conclusive judgements on the matter.