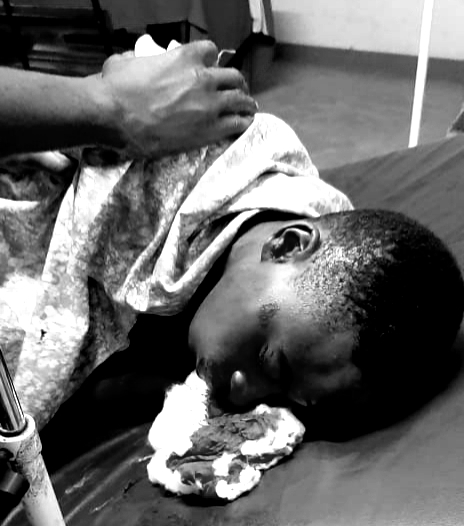 As the country is still decrying the excesses inflicted on the Jinja food vendor yesterday by a runaway unidentified cop, members of the Local Defence Unit have again shot down a school headteacher in Mukono. Eric Mutasiga, a headteacher of Merry Time Primary School is nursing serious injuries at Mulago hospital where he is admitted.

In a secret unannounced visit by our reporter today, we saw a frail Mutasiga lying unattended to in the emergency and accident victims ward. He was lying in a pool of blood with no hopes of getting a medical assistant.

Police has in a statement confirmed the incident and admitted it was done by an LDU officer. According to the Kampala Metropolitan spokesperson, Luke Owoyesigire, the injured headteacher Mutasiga was shot as he tried to shield the arrest of a suspect. He however says as police they will not take responsibility for the incident.

“Mutasiga was shot in the thigh and he’s currently under treatment at Mulago hospital. As police, we may not take full responsibility for his health expenses,” Luke told the press.

Mr. Mutasiga becomes the third Ugandan unarmed civilian to be killed by the LDU in this COVID-19 period. The past two incidents occurred in Masaka, Jinja and Kampala respectively. This poll doesn’t include the dozens of people injured by the LDU force.