Prison Authorities On The Spot For Releasing Suspects Illegally 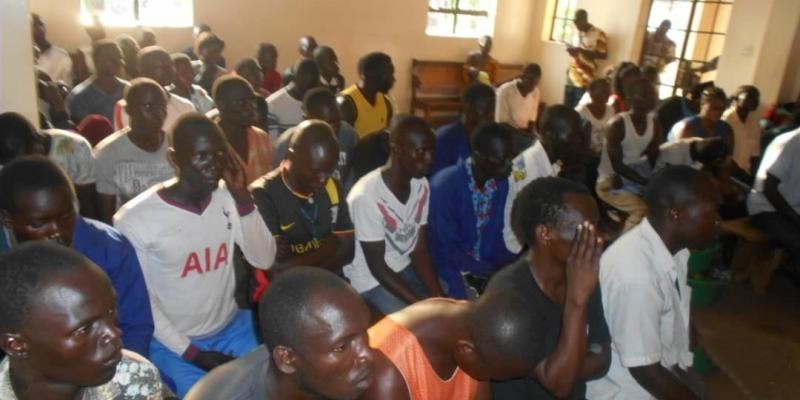 There was drama at the Lira Magistrate’s court on Wednesday where 21 people who were remanded to Kwania prisons for violating the Covid19 preventive measures were expected to appear. The 21 are part of 49 people who arrested on April 9th, 2020 for among other violating the curfew and Health Ministry guidelines.

Some of the suspects were released on bail, but 21 of them failed to meet the bail conditions and were remanded to Kwania prison. On Monday, a group of lawyers teamed up with well-wishers and secured a production warrant for the accused persons to appear before court on Tuesday. However, only one suspect appeared with the prison authorities, saying the other accused persons were not in their custody.

This prompted the Lira Grade One Magistrate; Susan Adelo to adjourn the matter to Wednesday and summoned Fred Angura, the Officer in Charge of Kwania Government Prison to explain the whereabouts of the remaining suspects. On Wednesday afternoon, Angura was seen around the court premises but didn’t appear before court.

Adelo later told court that she had a meeting with the Regional Prison Commander who informed her that the accused persons were never remanded at Kwania Government Prison. She explained that she had presented with receipts showing that the accused had paid their bail fees of Shillings 100,000 each and released despite the fact that the receipts were not on their court files.

“Original copies of the receipts were later attached to the remand warrant, which I had already signed indicating that the accused persons had been released,” she told court. Adding that, I therefore concluded that these payments were made after I had left court and weren’t brought to my attention since I wasn’t there so I don’t know whether they were released within the court premises that very day, I cannot tell! Maybe the Prison officers who were here can tell us.”

The suspect’s lead counsel, Mike Abwang Otim demanded an explanation from prison authorities, saying the fact that the accused persons were granted bail is not being disputed but rather their whereabouts. “Our concern as Human Rights Activists is now about the whereabouts of these accused persons because we know its court that remands and its court that releases and we also know that they must have been issued with bail forms,” he said.

Samson Isabirye, the Prison warder who was in court on April 15th, 2020 told court that the accused persons were released upon the payment of the bail fees in the bank. He also acknowledged the fact that the payment receipts were not presented to court because the magistrate had already left the court premises. Isabirye further explained that the accused persons were not given bail forms because there was no power to print them out.

Abwang wondered what would have happened if something bad had happened to the accused persons or they were re-arrested. He said in case of anything, the prison warders will be answerable. The State prosecutor, Paul Omara argued that the Corona virus pandemic has messed up with people’s minds, a reason why everyone is now “stupid” and not acting “normal”

In her ruling, Susan Adelo expressed her displeasure with the conduct of the prison authorities and warned to order their arrest should such things happen again. The suspects are expected to appear in court on May 28th for hearing.