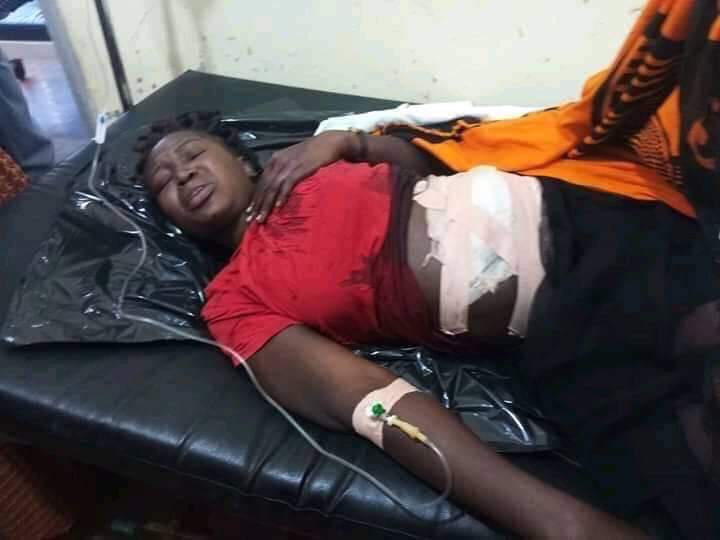 The 35 year old Evelyn Namulondo who was shot two days back in Jinja town has died at the hospital according to emerging reports.

Evelyn was severely injured by the bullets which passed through her abdomen and dislocated her intestines. Before her death, the 35 year old food vendor had told the media that she was travelling on a Boda Boda cyclist on that fateful morning at about 5:30am when they encountered a police roadblock. “The men in Field Force Unit uniform tried to stop us but the Boda cyclist defiantly rode away prompting them to fire live bullets. Unfortunately, I found myself lying on tarmac and the cyclist proceeded,” she said. “I was not assisted by the police officers because they also took off after firing at us. I was left alone in a blood bath,” she added. Namulondo was later that morning picked from the blood bath by a good Samaritan who rushed her to Jinja referral hospital where she has been admitted for the past two days till today when she breathed her last.

We contacted a doctor at Jinja referral hospital who is privy to the matter and she says the deceased was to undergo a surgery if she had amassed some money to take her through that process. “She has been rotting from the day they brough her. Her relatives could not raise the required shs 500,000 to start the process,” she told Ekyooto on phone fearing reprisals since she’s not authorised to speak to the press. “She died with her bullet stranded in the intestines,” she adds. Earlier, the Jinja police DPC had pledged to investigate and apprehend all the involved but to-date no officer linked to the shooting has ever been arrested according to our private findings. A relative to Namulondo says they lost hope in the police the day it distanced itself from the shooting and offering any assistance to the deceased while she was still admitted at the hospital. Evelyn joins the dozens of Ugandans that have succumbed to covid related state architectured brutality.