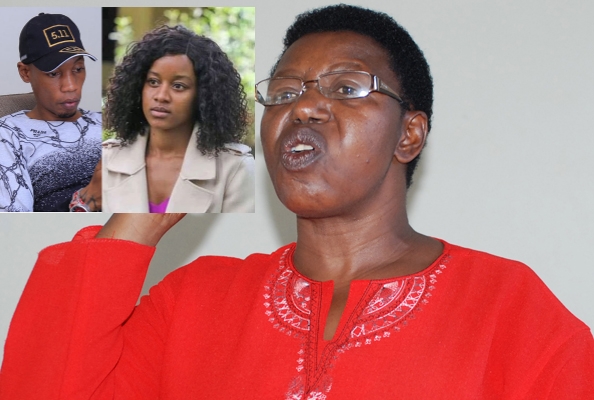 The ex Minister for ethics and integrity, Miria Matembe under her feminist organization has joined the pursuit for justice of Nandawula Stella and other girls allegedly sexually abused by a renowned city socialite, Brian Kirumira aka Bryan White.

Matembe on Saturday led Nandawula and her mother to the Kibuli based Special Investigations Unit (SIU) where they opened up a case on Stella’s behalf. The police then kept Stella in safe custody to undergo special medical examination. Matembe then left Kibuli to lead the arrest of the shameless tycoon but to her dismay, the immense security she encountered demoralised and suppressed all her efforts. Matembe says she had heard about the tycoon for quite a time and always wondered why he wields authority. In her private findings, she noticed that White had bribed all top police officers which is why they always shielded him from arrests. “I didn’t know whether Bryan White is a devil because I hear he has security better than the president’s,” says Matembe. “I think Bryan White is the new Vice President of this country. The way he is guarded, you may think he took over from Ssekandi,” she adds.

The fearless feminist appealed to the gender Minister to do something about White’s uninterrupted sexual advances on the vulnerable girls. “..Why does he force girls to abort..Is he a doctor?.. I call upon the gender Minister, Frank Tumwebaze to get to Bryan White’s home and arrest him,” she fumes.

By publication of this story, Ekyooto has authoritatively learnt that Minister Tumwebaze has already developed interests in the case of this socialite. White however pins fellow NRM cadre, Balaam Barugahare to be the brain behind his encroaching down fall. White claims Balaam is luring the young girls into giving fabricated testimonies against him.