Museveni asks Ugandans to feed on 250g of posho a day 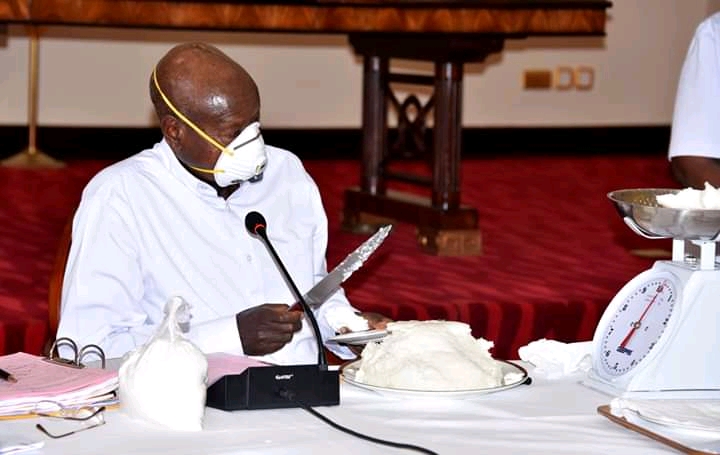 As the country heads for a food shortage crisis yet the lockdown is far from being lifted, President Museveni has today invited nutritionists and food scientists to practically study the feeding habits and establish if it can suit the quantity of the food being distributed.

From the genesis of the lockdown, government had no plans of feeding the directly affected vulnerable plight. However, when the opposition activists mounted pressure by delivering their own relief to the people, a panicky Museveni resolved to ban food distribution by any other individual apart from himself. A targeted population of 1.5 million urban Ugandans was to each receive 6kgs of maize flour and 3kgs of beans to push them through the lengthy lock down. In real sense, the distributed food is at most consumed within a week or even less depending on the size of the family.

In a twist of events, a gullible Museveni has again fallen prey to the deception of his advisors. They have convinced him that a human being can ably survive on 250g of posho in a day and this arithmetically projects 10 days consumption for 2.5 kilograms. His scientists have assumed that humans can feed in the same way as pigeons. Museveni and his misinformed scientists might be planning to extend the lock down days according to reliable reports. “The scientific conclusion we have arrived at is that 250g of posho are optimal for consumption (per meal for each individual) in this situation, this means that for 2.6ks of posho, about 10 days are possible,” Museveni reveals in a Facebook publication made today.