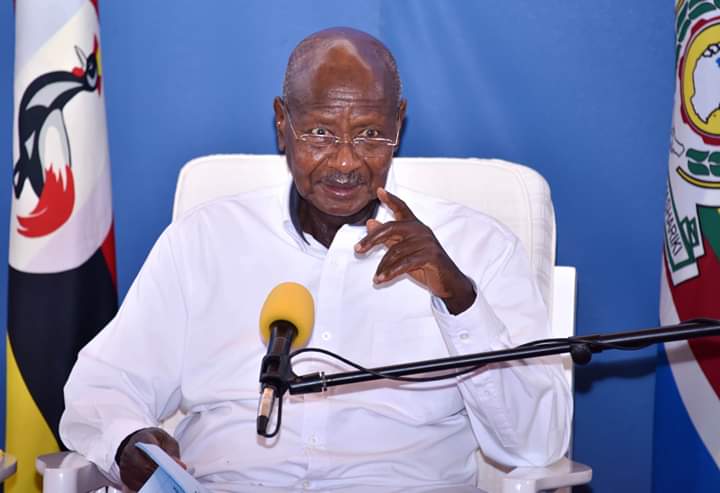 After realising that the customised People Power face masks are wildly selling within the population, president Museveni and his cabinet have finally resolved to institute a ban on these and pave way for their own at a ‘free’ cost.

The move follows a series of consultations from his advisers who tasked him to phase out the People Power face masks and improvise his own if he is to be emerge a hero ahead of the 2021 general elections.

Museveni first angrily shunned the address in protest of his advisers who insisted on the Bobi Wine mask ban. He finally returned and confirmed the mask distribution in a reinstated address delivered on May, 18 at State house, Nakasero.

Ekyooto has learnt that the basis of the earlier address postponement was squarely reliant on the mask debate in which Museveni contested the idea on grounds that it would be too expensive for him. It was upon the intervention of his political and communications adviser, Don Wanyama that Museveni revised his stance. According to sources, Wanyama told off Museveni to either give out free masks or endure defeat to Bobi Wine’s version.

Blow by blow analysis of the address

While Ugandans were jovial and in highly expectant of the lifting of the lockdown, they were made a fool of when Museveni temporarily seemed to ease the lockdown and literary closed it immediately.

Museveni said it would only be allowed to operate with half capacity and of which mask wearing is to be mandatory for all passengers. The mask distribution just like food has been only authorised to be conducted by the government. However, all vehicles have been directed to hit the roads on June, 2 2020 when the mask distribution is expected to have been effected.

Ugandans to stay in diaspora

Museveni inadvertently hit out at his Foreign Affairs Ministry for selectively allowing in a handful of returnees but his fury was short-lived. He emphasised the need to keep the millions of stranded Ugandans abroad in guise of insufficiency of quarantine space.

The night address was fully centred on the mandatory wearing of state provided masks. To a grassroot Ugandan, it is ideally great for the government to improvise a face mask but in real sense is it logically possible to entrust the same people to possibly deliver masks to 45 million people when they are still struggling with food delivery to the 1.5 million selected urban dwellers.

Only selected candidates in final years of study at all levels of education have been granted permission but the fees/tuition debate remains unresolved.

The truck driver question has been answered with mandatory presentation of a health certificate from country of travel where only drivers with the negative status are to be vented path. This resolve follows a public outcry from Ugandans who have been indoors for over 60 days.